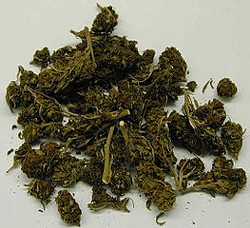 Yesterday, we reported on the allegations of Sergeant Gary Wiegert that the metro police department is suppressing his free-speech rights by blocking him from lobbying for marijuana reforms. His attorney has since filed a formal complaint in federal court, on view below.

But what does this latest controversy say about the police department's stance on marijuana?

Show-Me Cannabis, the advocacy group in question in this dispute, says the department's retaliation is noteworthy -- given that St. Louis officials have generally been supportive of the very cause Wiegert is advocating.

Part of the confusion in this case is that while Show-Me Cannabis, a Missouri advocacy group, supports the legalization of marijuana, the policy change that Wiegert is pushing is a decriminalization effort that would reduce the punishments for those found with small amounts of pot. In fact, at the state level and locally in St. Louis there are currently no efforts to legalize marijuana -- even if that is a long-term goal of Show-Me Cannabis.

As we've reported, a St. Louis Board of Aldermen proposal this year aims to give law enforcement the option to issue a summons in certain marijuana cases, with the goal of using resources more efficiently and not wasting time and money on arrests and prosecution through the circuit court when unnecessary. This mirrors decriminalization proposals at the state level.

The St. Louis Police Department has supported this.

At a hearing last month on the Board of Aldermen bill, a metro police sergeant testified that it was a good proposal that would save the department resources, Payne tells Daily RFT. And Alderman Shane Cohn, the sponsor, has in the past told us that the police department favors the change. The St. Louis bill we be brought up again in April and could very well pass, Payne says.

If police department higher-ups support the concept, why are they (as the new lawsuit alleges) opposing Wiegert's lobbying?

Continue for more details on the lawsuit and on pot reform proposals.