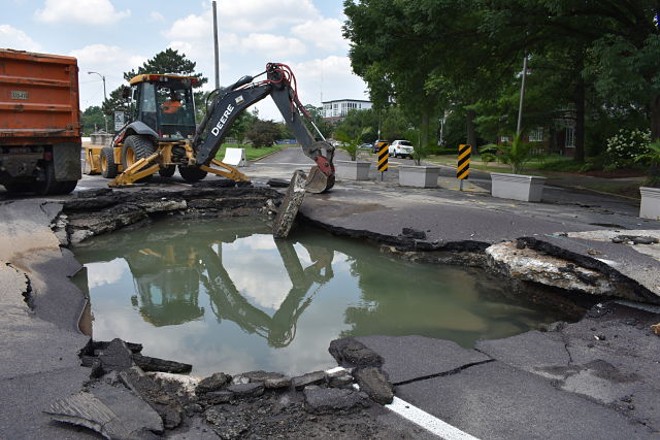 DANIEL HILL
The break blew a massive hole in the roadway covering three lanes.
Commuters considering Lindell Boulevard as part of their drive home today, be warned: The street is indefinitely shut down where it intersects with Union, due to a massive water main break that has destroyed the road.

Crews are on the scene where the break has torn a massive hole in the roadway that covers three lanes of traffic, with cracks and ridges stretching across the remaining lanes and down the street. Water is flowing like a stream down the badly damaged roadway, and the hole itself is overflowing as well.

According to Vincent Foggie, a worker with the city's Water Division, the reason the destruction is so dramatic is that the main that broke was a 30-inch feeder that directs water to smaller mains.

DANIEL HILL
Vincent Foggie, a worker with the city's Water Division.
"It's what we call a transmission main that moves water from the plant to different parts of the city," he explains.

Despite the size of the break, Foggie says no residents are currently without water.

"Right now we got the break isolated, so there's nobody out of water at this time," he says. "We're feeding the city from other mains within the city."

Going forward, Foggie says, the workers will need to dig the hole up further and inspect the pipe before making repairs. He says that will take about 48 hours, during which time Lindell will be shut down from Union to Kingshighway. Only after that 48 hours will road crews be able to come in and repair the badly damaged road, and it's unclear how long those repairs will take.

"The road will probably be shut down for at least a week," Foggie estimates.

Asked if he's ever seen a break this bad Foggie says he has — "I've been around a while," he says — but he admits it's not often.

Check out video footage of the destroyed street below: