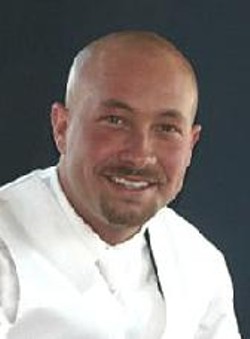 After being MIA for months of board of aldermen meetings, Valley Park Mayor Nathan Grellner finally showed his face last night at a raucous public meeting, showing both resignation and defiance.

It's been an eventful few weeks for the 27-year-old mayor now nicknamed "Charlie Sheen." A bizarre story about a DWI arrest and a spit-shield. A $4,000 tab for personal items on the city's MasterCard. A hospitalization for "exhaustion."

Oh, and one lousy tip for "Emily" at the lavish Penthouse strip club. At least he saved the city some money there.

In a recording by KMOX, Grellner is heard telling the board and an angry contingent of citizens last night that he wasn't "running or hiding from anything."

"BULLSHIT!" someone yelled from the back.

Although he hasn't been at a meeting since February, things really went pear-shaped for the mayor earlier this month when he was arrested for suspected drunk driving. No charges have been filed as of yet, but rumors were leaked to the media that Grellner became combative, had to be pepper-sprayed, and even masked when he tried to spit at officers.

Next, it was revealed that $4,000 worth of personal expenses have shown up on the city's credit card, including a washer and dryer, and multiple trips to fast food restaurants. Perhaps the most damning was a $31 check for the Penthouse Club, in the early morning hours following a night Grellner was supposed to have been at the aldermen's meeting. Grellner paid at 3:35 a.m., leaving a measly $3 tip for poor Emily.

The board has already passed a vote of no-confidence against the mayor.

Last night, in a letter to the city aldermen and residents, Grellner expressed regret and pulled back from an earlier promise to halt an audit of his expenses:

I would like to sincerely apologize for my behavior on June 5, 2012. My conduct was inappropriate and I would like to express my regret to the residents of Valley Park and my family. I can only attribute this to the high levels of stress that I'm facing in my life at the present time.

I have taken responsibility for my actions and I sincerely regret the disorder that I created in the news media for the City of Valley Park. I want to reassure the residents that I will not repeat such inappropriate behavior in the future.

I respectfully request you to forgive me for my conduct.

Regarding some personal credit card purchases made by me in error over the past month I was not in the right state of ind to differentiate between my personal credit card and the City Credit Card. Steps were immediately taken to reimburse the City before a formal billion was ever rendered. I apologize for my mistakes in this regard as well and welcome a forensic audit if that continues to be the Board's pleasure.

However, he made no promises to step down, and snapped at Alderman Rita Collins to "grow up" when she pressed him on his strip club visit. He may not have realized how that sounded.

This can't possibly be the end of this saga. Stay tuned.