Mayoral Candidate Irene Smith Admits She "Alleviated" Herself in Trash Can

Send a News Tip
Note: This post was updated below.

Don't expect Irene Smith to unleash the English Language police if elected mayor of St. Louis this coming March. At least not after she dropped -- and repeated -- a glaring malapropism during an interview this morning with McGraw Milhaven on KTRS (550 AM).

You might call Milhaven's interview groundbreaking on two fronts. 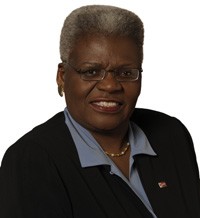 Can you tell by my face? I'm alleviating myself right this minute.
Smith, as you may remember, made national news a few years back when as an alderwoman she appeared to urinate in a trash can during a filibuster in City Hall. At the time Smith denied the incident and to my knowledge has never admitted that she actually pissed in the ol' bucket -- until today.

When asked about it this morning, the mayoral candidate told Milhaven: "Yes. I alleviated myself."

Huh? What's that Irene? Don't you mean "relieved" yourself?

No. Smith repeated: "I admitted it that day. I alleviated myself in the trash can."

Okee dokee, Irene. If you say so. But you really shouldn't have George W. Bush write your talking points. It just doesn't sound good.

Update: About a half-hour after this post went live, I received a phone call from Smith's public-relations director Patricia Bynes. Bynes points out that according to the Merriam-Webster dictionary, "alleviate" is a synonym of "relieve" meaning to make (as suffering) more bearable.

"To alleviate oneself is just another way of saying to relieve oneself," argues Bynes. "It means to lighten one's load so to speak."

Bynes adds that many people haven't heard the term because people generally don't talk about going to the bathroom.

In related news, Bynes says Smith did admit back in 2001 to peeing in the trash can in City Hall but it never got any publicity at the time. "Irene is admitting to it again because it's time we move on to the real issues of this campaign," says Bynes.

Boy am I alleviated she cleared that up!