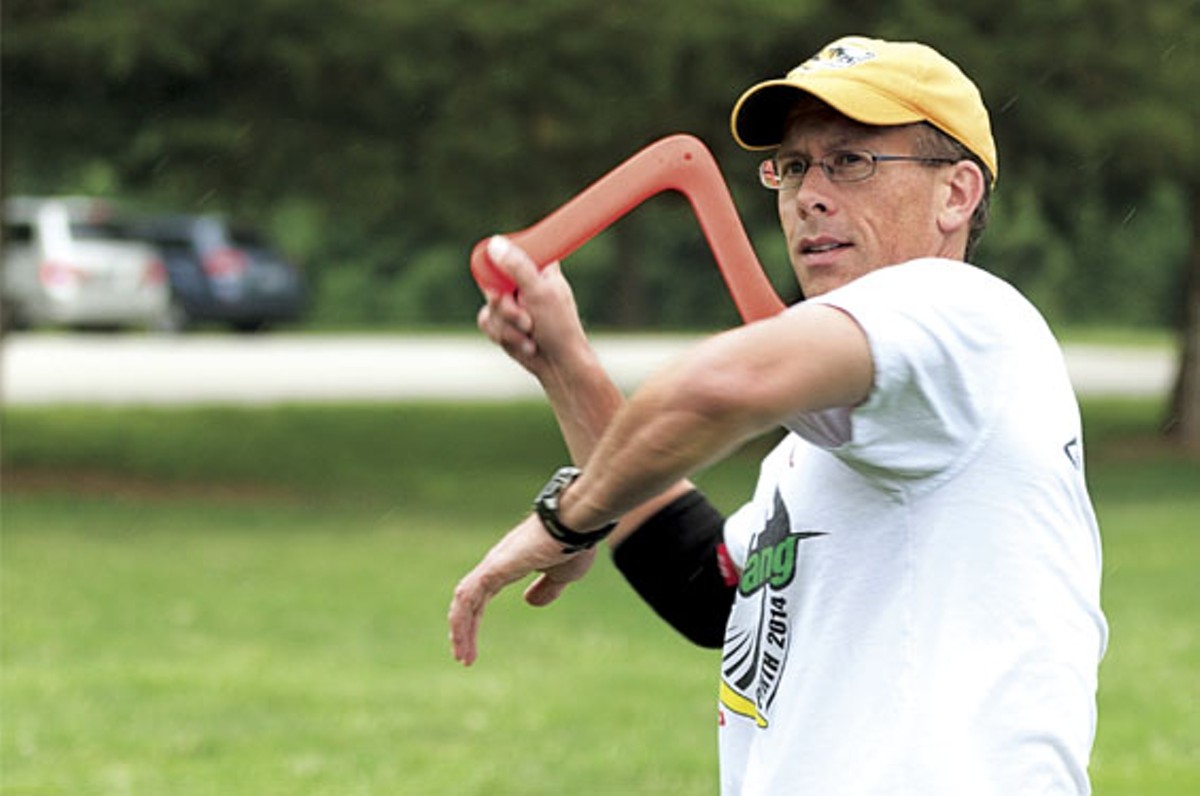 Essig launches a boomerang into the wind at Buder Park. Tom Carlson

A recent Saturday morning finds George Essig in one of his favorite spots: a wide-open field at Buder Park in west St. Louis County. In adjacent fields, children play Little League ball and hobbyists fly model aircraft. Essig makes sure they're a safe distance away.

Surveying the landscape from beneath a Mizzou cap, Essig pulls a protective sleeve over his right elbow and slips a work glove over his left hand. He plucks a handful of grass from the ground and lets it fall, testing the wind direction like a golfer lining up a long drive. Nodding approvingly to himself, the 44-year-old father of two opens the toolbox on wheels that he's rolled with him into the center of the ball field.

Inside are dozens of boomerangs tucked into expanding file folders. There are zigzag-shaped boomerangs made by craftsmen in Germany; propellerlike devices designed for a variety of specialized maneuvers; and classic wooden boomerangs that could serve as props for an Australian beer ad or a Crocodile Dundee flick. For today's outing, Essig chooses a plastic three-blade model designed for maximum velocity.

With a grunt, Essig hurls the device, sending it out in a blindingly fast circle of about 30 yards. A quick second later the boomerang lands in Essig's gloved hand with a smack.

"If the wind wasn't up I could throw a faster one," he says, somewhat sheepishly.

Over the next several hours Essig will carry on, practicing all sorts of throws. He'll lob boomerangs straight up in the air to see how long he can keep them aloft. He'll perform trick catches behind his back, under one leg and kicked off of one foot like a Hacky Sack. He'll toss two boomerangs at once, catching one first and jamming it between his teeth like a Hollywood swashbuckler so that his hands are free to catch the second.

Essig practices like this for hours two or three times a week. He has to if he wants to remain a member of the vaunted United States Boomerang Team and one of the best boomerang hurlers in North America.

Read the full story in this week's Riverfront Times.