The $51 million trolley has been granted an additional $1.2 million to continue operations 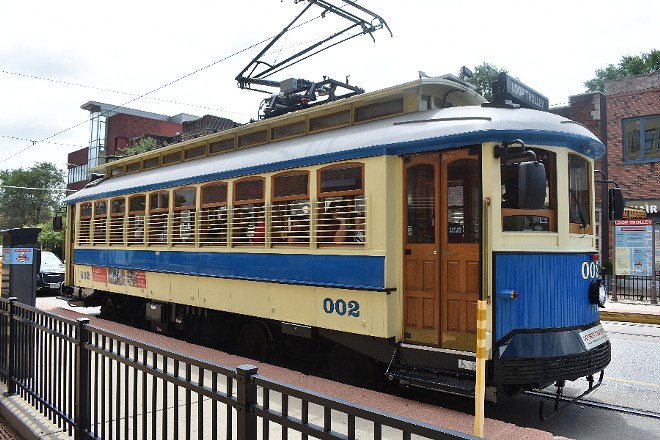 DANIEL HILL
The trolley no one wants but everyone's paying for.

St. Louis’ unkillable Loop Trolley just got another round of life support.

The East-West Gateway Council of Governments voted on Wednesday to give the deeply unpopular yet surprisingly resilient transportation boondoggle an additional $1.2 million in federal grant monies after the Bi-State Development Agency requested additional funds to keep it going for the next two years.

The trolley has already cost taxpayers $51 million in federal and state dollars, but local officials feared it’d all be for nothing if they failed to revive it after a three-year hiatus. The Federal Transportation Administration threatened to demand $37 million back from the Loop Trolley Transportation Development District in December if the trolley still wasn’t up and running by summer.

Earlier this year, the Development District offered up an abbreviated schedule for the trolley to operate Thursdays through Sundays during summer and fall months. The revived trolley executed an astonishingly successful run on its first day back on August 4, shocking everyone by not breaking down or hitting any parked cars for a change.

Still, Bi-State Development, which took over operations in February, needed some extra funding to continue to manage the seemingly bottomless money pit.

This extra $1.2 million with a $540,000 match from the Loop Trolley Transportation Development District will keep the trolley going as it works toward a more sustainable future, according to Jim Wild, executive director of East-West Gateway Council.

“It’s had a rough start, but I think it would be good for the region for the trolley to at least have a chance to operate with this two-year test,” Wild tells the RFT.

Wild says the trolley is supposed to become self-sustaining in two years. In the meantime, the newly approved funding allows the Trolley Transportation Development District to build up a reserve of taxes collected in the area, he explains. The district levies a special tax in the area surrounding the trolley’s 2.2-mile route.

Nevertheless, Jones and other regional leaders have said the trolley needs to restart. They fear a failure to get the Loop Trolley up and running again would risk St. Louis’ eligibility for future federal funding.

“Failure to fix the Loop Trolley problem risks future federal support we need to improve and expand public transit in the St. Louis region through projects like Northside-Southside Metrolink expansion, which will transform our city and connect residents to good jobs, health care opportunities and more,” Jones said in a statement on Wednesday.

The benefits probably outweigh the negatives, Wild says, especially when the negatives are involve repercussions to future projects.

"If we can't show that we are able to perform on projects that they give us money for, the feds could penalize us in future requests," he says.