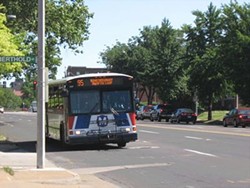 The price of passes goes up in July.
After holding several public meetings and conducting a survey on a proposed fare increase, Metro today announced how -- and by how much -- it will increase fares starting the first week in July.

First the good news: One-way fares won't go up. A cash bus fare will remain $2, a one-way MetroLink ticket bought on the platform stays at $2.25 and the Call-A-Ride fare will still be $4.
And now for the less-good news. The prices for monthly and weekly passes will increase, as will university semester passes and two-hour transfers.