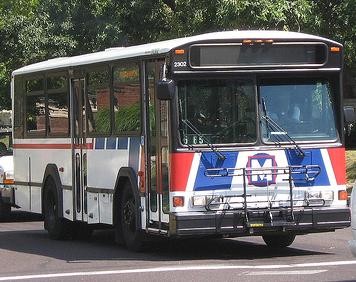 MATRA's goals include the creation of a citizen's alliance board to give input on local bus routes.

Right now, Edward Williams Jr. is taking the bus. All around him are the signs and sounds of a ride that is not going ideally: He is late, and apologetic error messages are coming from a robotic voice overhead. Right now, Williams is not happy. He hasn't been for a while.

A passionate St Louis transit rider since childhood, the 40-year-old Williams has taken almost the same route from his home to his job for the seven years he has worked as a grocery store cashier. He works 40 hours a week in shifts that can find him at the store as early as 6 a.m. or as late as 10 p.m., and though the bus numbers change depending upon the time, his route does not. Because there are no buses east of 14th Street, he takes the bus and the train from his Tower Grove East neighborhood to the downtown store every shift.

Sometimes, his rides are better than others, but he has only become personally invested in each one relatively recently.

In March 2009, Williams, frustrated by the infrequency of available buses and stranded by the last bus more often than he'd like, organized MATRA, the Metropolitan Area Transit Riders Alliance, to collect volunteers and combat the issues he says he experiences regularly on Metro Transit.

In its two and a half years of existence, the organization has seemed stuck in its infancy, and future plans are consistently "in the works." MATRA took a six and a half month hiatus last year while Williams was working extra hours to pay off debt, and the current plan is to fold it into the creation of another more official group, the Transit Riders Union of St. Louis. It's unclear when that move will be finalized. In the meantime, MATRA's official website, which costs about $270 in annual hosting and domain fees, was only recently relaunched.

"Right now, what we're trying to address is being listened to," Williams says. The group's ultimate goal is to create a citizen's advisory board, to guarantee consistent public input on Metro Transit's agendas. "We want more of a citizen input on how the routes are structured, what stops are limited, how routes are restructured."

The group's membership is currently around ten people, who meet every two weeks to discuss strategies that include letter-writing campaigns and flyers. (That cost Williams $600 in the group's first and most active year.) The website's events section currently lists only a pub crawl scheduled for later this month, and Williams admits the members are currently too busy working on the Transit Riders Union to schedule additional events. Time and money are the crux of the group's revolving set of delays: With few members, all of whom work full-time, it's hard to devote resources even to an aggressively passionate side project.

In the meantime, Williams takes his issues with Metro to the Internet, where he uses his Facebook page and MATRA's to comment on problems with his daily rides. A post on Metro Transit's Facebook wall this Sunday reads: "Another MetroBus #70 with A/C not working well. Bus #023254. It's crowded and hot as you know what on this bus. PLEASE FIX." Metro replied politely that he should tell his bus driver and called him Eddie. Williams has posted on Metro's Facebook page six times since then.

"They give me P.C. answers," Williams says. "What am I supposed to do: Lose my seat on the bus, walk up front and tell the driver that the AC isn't working? So she can do what?"

A large part of the problem for Williams is the difference he sees between the quality of service on the bus and the same service on the train. "There's such a stigma," Williams tells Daily RFT as the robot voice makes another announcement inside the bus. He pauses while he waits to be heard. "You take the bus, and you're treated like you're a second-class person. A train person can get something done with the snap of a finger. They only care about the white suburbanites who take the train."

Metro currently holds meetings that are open to the public, which Williams says he attends, but his goal is to further increase outside feedback on changes to the transit system, such as the additional and removal of stops. The recent loss of the bus stop at South Grand and Connecticut upsets him, but he finds more fault when the schedules aren't quickly updated to reflect those changes.

"If you're poor and don't have access to the Internet, you can't get on Metro's website and find out which stops are being cut," Williams says. "We call them on it, and they say, 'Look on the Internet.' I have Internet, but those who don't can't look it up."

Unfortunately for Williams, that would mean they also can't look at MATRA's Facebook page or official website, the two main ways the group hopes to attract attention and membership. But Williams thinks the passion is there.

"People around here are mad," Williams says. "Right now we're in meetings working on the website language, hoping to combine groups within another couple of months. We just want consideration."