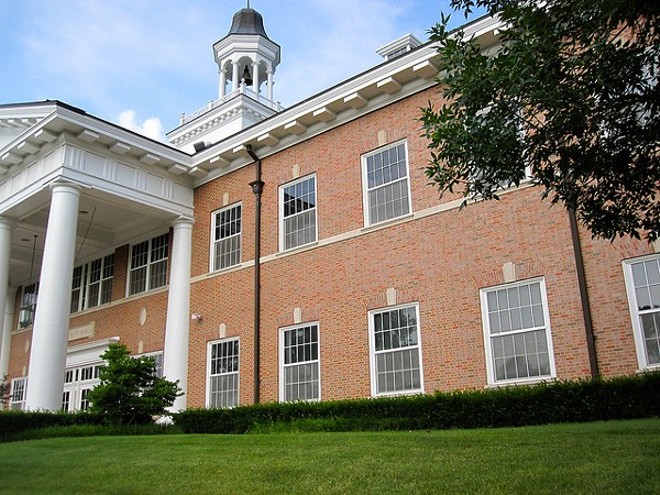 PHOTO COURTESY OF FLICKR/DEAN SHARESKI
MICDS is a private school in Ladue.

The students who freely dropped the n-word and other coarse language in a Snapchat conversation later published on Twitter are no longer enrolled at the prestigious private school.

That's according to a statement that Mary Institute and St. Louis Country Day School published on its website this afternoon. The statement does not say whether the students were formally expelled, but does it make clear that there was a disciplinary process, and — passive voice alert! — "it was determined that none of these students can remain in our community."


With this incident, the School followed its careful and thorough process - from investigation, to recommendation, to review and then to final decision - to determine the appropriate discipline for each student. It was determined that none of these students can remain in our community because their conduct violated our most deeply held values, was contrary to our Mission and harmed our community in significant ways.

The school also outlined a series of steps it intends to take "as a community."


Friends, students, parents, alumni, faculty and staff—as you know we strive each day to live out our Mission to embrace all the world’s people. But let me also be clear—I provide you a list of our current and future endeavors not to toot our own horn, but simply to respond to the questions that have been asked of me.

And at the very least, this incident has proven loudly and clearly that we are still not doing enough. But I also say to you with confidence that my—and our—hearts are filled with resolve to continue the work we have begun, and into which we will fully live with your partnership. The Board of Trustees stands firm in its steadfast support.

The students' conversation, which we included in our previous story, used the racial slur repeatedly. In it, the female students appeared to mock another student who objected to its use.

A male student at the Ladue school put screen shots of the conversation on Twitter on Sunday with a short message for his school: "@MICDS. Handle this."

Apparently, they just did.