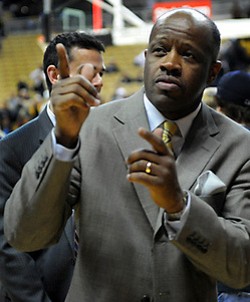 livewire.missouri.edu
Mike Anderson: Playin' the game; makin' it rain.
This is not a personal slight against University of Missouri basketball coach Mike Anderson.

I like Mike. In fact, what's not to like about the man who resurrected the Tiger basketball program from the train wreck inherited from former coach Quin Snyder?

What I don't like is the system. College sports, unlike the pros, is supposed to be all about the glory of the game and not about the almighty dollar. It generally is, too, until this time of the year -- the end of the season.

Anderson, who makes a guaranteed salary of $1.5 million at Mizzou, is rumored to be among the candidates to take over the basketball program at University of Arkansas where he got his start in coaching. Now, with absolutely zero confirmation that Anderson has actually talked to Arkansas, the MU board of curators is frantically meeting this week to increase his salary in hopes of making his current job all the more attractive.

Rumors are that Anderson could earn a guaranteed $2 million next year, equivalent to a 33 percent pay raise despite the fact that he had a pretty disappointing 2010-2011, with his Tigers winning just one conference road game during the regular season and embarrassing themselves in a quick exit from an NCAA Tournament in which they arguably did not belong.

But, hey, that's how college sports works. Some coach elsewhere gets fired and suddenly the rumors are that your coach could fill his shoes. Honestly, I wonder if the coach's agents don't start these rumors. It would be well worth their while to do so.

Just two years ago Anderson was able to double his salary at speculation that he was being recruited by University of Georgia. In Anderson's defense, it works the same way on the gridiron. Mizzou football coach Gary Pinkel saw his salary jump from $1.85 million to around $2.5 million in 2008 on rumors that he could leave to take over the program at University of Washington. And that contract came less than a year after he received a $550,000 pay raise.

I know. I know. This is how college sports works, and successful teams bring in far greater revenue than their coaches demand in salary. Still, it's amazing to witness the downpour of greenbacks each time the Chicken Littles of the collegiate sports look up and see the sky falling.