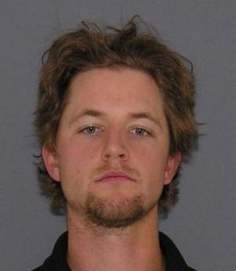 Okay, just pretend for a second you don't know this mugshot is of a man with a couple million in the bank. Is anyone at all surprised he was arrested for shoplifting?
Mike Leake, professional baseball player, Reds' pitching phenom, and one of the only players to completely bypass the minor leagues in recent memory, was arrested for shoplifting Monday evening. Arrested for shoplifting approximately 60 bucks worth of American Rag tee shirts from a Macy's in Cincinnati, in fact. Which isn't the most embarrassing thing you could ever be caught shoplifting, really; not nearly as bad as getting caught stealing condoms from Venture that time when I was fourteen, anyway. Hypothetically speaking, you understand.
Is it wrong that when I first heard about this my immediate thought was, "Well, maybe he'll end up with some jail time and that will mess up the Reds' rotation," and then didn't really feel bad about thinking that? I feel like I should feel bad, but I totally don't.
The thing which has to be mentioned here, of course, is the monetary value of the shirts, namely the $60 value compared to the $425,000 salary Leake earned in his first season in the big leagues, along with the better than $2 million signing bonus he received as a first-round draft pick. One would think he could afford pretty much however many tee shirts he wants.
So far, the excuse offered by Leake is that he was trying to exchange the shirts, which he had previously paid for, but was apparently unaware retail establishments tend to frown on you simply exchanging merchandise yourself without telling anyone. Unfortunately for Leake, that story seems to conflict with the first-time offender program his lawyer is attempting to get him into, which would allow Leake's record to remain clean. Said program, however, requires the defendant to admit guilt; I'm not all that sure unfamiliarity with retail exchange protocol counts as an admission of guilt.
Personally, I'm kind of hoping we get more excuses in the coming days. Things like exhaustion and heat stroke and a prescription medication interaction which caused confusion and an uncontrollable urge to steal cheap tee shirts. I'm also hoping when Leake makes his next scheduled start on Thursday, which Dusty Baker has confirmed he will, the stadium audio/video people play clips of Winona Ryder movies between innings and change his at-bat walkup music to Jane's Addiction's "Been Caught Stealing."