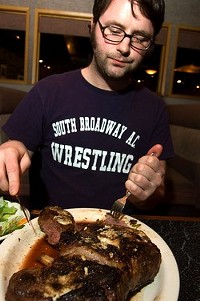 Seems like only yesterday our little Mikey was driving off into the sunset in his Buick, headed back to his native Seattle to pursue his destiny.

A year later, Seely has found his true calling. You can read about it here -- suffice to say it involves two of the World's Strongest Men and three four-and-a-half-pound sirloin steaks, not to mention raspberry sherbet.

P.S.: Overcome by a wave of nostalgia, Unreal is reminded of our own feed-the-piehole efforts, in particular the time we took on Sonya "The Black Widow" Thomas in a T-rav eating contest (scroll down to last item).