Next to him, there was Carlos Brown Jr. on the saxophone, Everette Benton and Kayla Coates on the drums, Marvin Cooper on the bass, Javier Staples on the trombone, Terrion Pette on the piano and Gerrell Lewis on the tenor sax. They swayed to the rhythm, cool but forceful, weaving their sounds amongst one another as precisely and majestically as a flock of starlings.

Men in newsboy caps tapped their toes and women in satin button-ups clapped their hands. The Miles to go Jazztet of East St. Louis Senior High School had the room bouncing through Monday's Miles Davis Festival.

And perhaps no one was bouncing more gleefully than the man in the charcoal sweater in the booth by the stage, Delano Redmond, the band leader. Redmond has been a music instructor at East St. Louis for seven years. He grew up in the city, understands its history and its pride. Jazz runs through his blood, just as it runs through his city's. His father was taught by the same band director as East St. Louis legend Miles Davis. And since Redmond learned jazz from his father, he tells his students that they are essentially learning the same way Miles Davis learned. They are keeping alive the great jazz tradition in of one of America's great jazz cities.

"We have a sense of pride, a sense of home" Redmond says. "And you have to be in East St. Louis to really understand it." 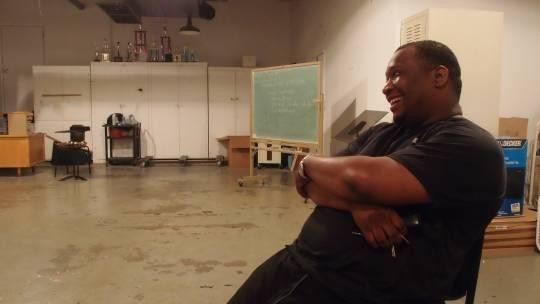 Albert Samaha
Band leader and music instructor Delano Redmond helps keep East St. Louis' rich tradition of jazz alive.
For their part, the 30 or so students in Redmond's jazz program take seriously their opportunity to represent the city. The band room dances and blares all day, as students squeeze in practice time before, between, and after classes, many showing up at 7:30 in the morning and staying past 6:30 in the evening.

"The kids find a way to get into this band room," Redmond says with a grin. "There's music playing in here at all hours."

As such, Redmond has built one of the best high school jazz programs in the state. The Miles to go Jazztet is basically the starting lineup of the program's top talent. This year's group, the one up on stage at BB's, features two Illinois Music Educators Association all-state selections. Trumpeter Lewis and drummer Benton, both seniors, made the state's honors jazz band last year, which means Lewis is one of the three best high school trumpet players in Illinois and Benton is one three best high school drummers in Illinois. In May, Miles to go was one of fifteen groups selected to play in a nationwide high school jazz band festival at the Lincoln Center in New York City.

The success of the program comes despite a unique characteristic: none of the students have ever taken private lessons, which, according to Redmond, sets them apart from almost every other high school jazz band in the state, if not the country.

Along those same lines, unlike in many other high school's music programs, East St. Louis' students don't need to buy their instrument. The school district, proud of its city's rich jazz tradition, has helped the high school maintain a sufficient supply of rental equipment. Consequently, Redmond's band room has become a breeding ground for raw talent, thirsting to be sharpened.

"We'll take anybody who walks in off the street, if you say you wanna play and you're willing to put in the time and effort," he says. "If that kid went to another school, he walked in and he said 'I know nothing about music but I really wanna play,' he wouldn't get an opportunity. So you wouldn't be able to find that this kid is a genius."

There was certainly something genius going on up on that stage Monday night, sliding down the brick walls and through the mass of nodding heads, past the the framed black-and-white photos of revered local legends and out the door so that all of South Broadway could hear 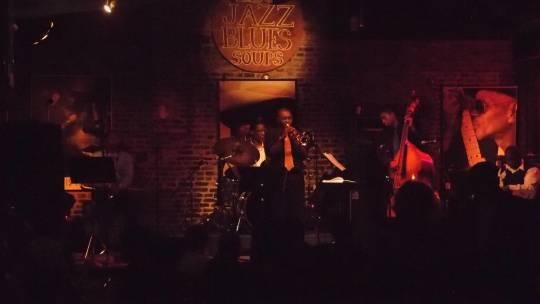