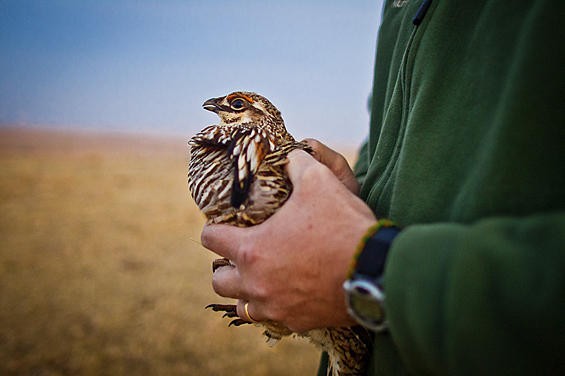 Last spring, you may recall, Riverfront Times joined the Missouri Department of Conservation on a daring mission to the outskirts of Salina, Kansas, to kidnap several dozen prairie chickens and bring them back to the Wah'Kon-Tah prairie, about 100 miles southeast of Kansas City. Early in the spring, the prairie chicken population on state nesting grounds had dwindled to about 100 birds. This mission was in the fourth year of a five-year project to restore the prairie chicken to Missouri.

The prairie chicken, besides being one of nature's most endearing creatures, with its odd mating cry (known as a boom), is a crucial indicator of the health of the prairie environment.

Over the course of their three-week mission, the conservationists captured 52 cocks and 26 hens and resettled them in Wah'Kon-Tah. But they were still uncertain as to how the prairie chickens would fare. They were vulnerable both to predators (such as hawks) and to the weather; because prairie chickens can't thermo-regulate, they can freeze to death in a rainstorm. Rain can also kill unhatched chicks in their shells.

Fortunately, the hot and dry summer that was so miserable for us humans was very good for the prairie chickens.

"We had an apparent nesting success of almost 80 percent, which is phenomenal," said Max Alleger, the department of conservation's grassland bird coordinator, in a press release.

Each of the chickens that was transported from Kansas was fitted with a radio transmitter so the conservationists and a team of students from Mizzou could track their movements. This year, the chickens produced 29 nests, 23 of which yielded broods. All this translates into 52 chicks. In previous years, the hens only managed to raise eight broods.

Alleger is optimistic about the prairie chickens' chance of survival, particularly if the next few summers are also hot and dry. Next spring, the conservationists will make another trip out to Kansas to capture a final batch of chickens. After that, the prairie chicken restoration project will concentrate solely on making the Missouri prairie a hospitable environment for the birds.

This will involve maintaining the prairie grass, weeding out non-native plants and expanding the nesting grounds -- prairie chickens like lots of wide, open space -- by enlisting the cooperation of private landowners. "The birds have shown a real preference for cattle-grazed areas," says Alleger. If all goes well, there should be 3,000 prairie chickens in Missouri ten years from now.