Mississippi River Second-Most Polluted In Nation According to Environmental Study 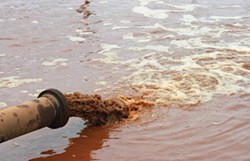 The Mississippi River is nastier than you might suspect.
Environment America yesterday released Wasting Our Waterways, its comprehensive report on the health of the nation's waterways, and there's good news and bad news for Missouri.

The good news is that Missouri ranked 28th on its overall toxic discharges in rivers and streams. There's definitely room for improvement there, but we're not Indiana, Virginia or Nebraska, the states that finished first-, second- and third-worst, respectively. The bad news is that if the Mississippi River were a horse, it would have already been shot.

Not good. Not good at all. Environment America hopes the release of this information will raise support for its plan to have the Obama administration to close loopholes in the Clean Water Act.

At the very least, it makes one leery of swimming in any rivers this summer without first checking the report.