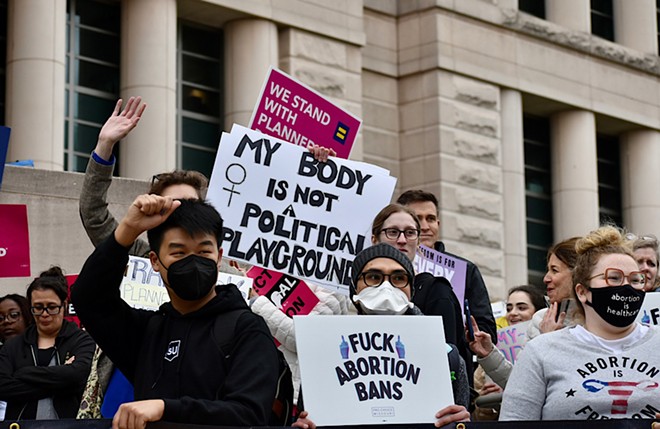 Reuben Hemmer
After Politico leaked a draft majority opinion from the U.S. Supreme Court that full-throatedly overturned the constitutional right to an abortion, St. Louisans gathered in protest.

Ask any pro-choice advocate if they were surprised by the Supreme Court’s leaked draft opinion to overturn Roe v. Wade, and they’ll most likely say no.

Pamela Merritt, executive director of Medical Students for Choice and an abortion rights advocate, began to “mourn the loss of Roe immediately following the election of Donald Trump.” Dr. Erin King — executive director of the Hope Clinic for Women in Granite City, Illinois — says access to abortion has been nearly nonexistent for years, even without a Supreme Court ruling.

For decades, the state’s predominantly conservative legislature has dissolved the state’s pool of abortion providers. Thirty years ago, the state had 29 abortion clinics, compared to the lone survivor operating in the Central West End today. And from 2020 to 2021, the number of abortions performed in Missouri plummeted from 1,471 to 179, according to the Missouri Department of Health and Senior Services.

DANNY WICENTOWSKI
Previously, there were nearly 30 abortion clinics in Missouri. Now, there is only one.
Pro-Choice Missouri Executive Director Mallory Schwarz says that for years current regulations and state laws have made abortions nearly inaccessible.

“We’ve essentially been operating in a post-Roe environment for many years, and the majority of people in the state already are forced to flee the state to access abortion,” Schwarz says.

So, in a state where abortion access has consistently dwindled, who will be most affected by a near total abortion ban once the Supreme Court strikes down Roe? Minority and low-income Missourians will bear the brunt.

“If you have money, you can get on an airplane and get yourself to another location,” McNicholas says. “But what we know through our experience working with people in Missouri is that abortion restrictions are always going to disproportionately affect the most marginalized and minoritized communities.”

Missouri is one of 13 states with so-called “trigger laws” that will end almost all abortion access upon the overturn of Roe. Many of these states, such as Arkansas, Kentucky and Oklahoma, are in the Midwest. Other states without “trigger laws,” including Kansas, where nearly half of abortions performed in 2020 were for Missourians, may also see further restrictions. 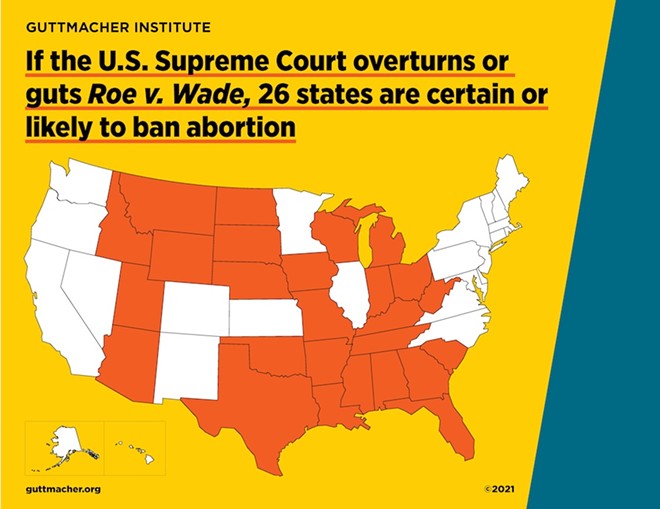 Guttmacher Institute
Missouri is one of 26 states (indicated in red-orange) that likely will ban abortion if the Supreme Court overturns Roe v. Wade.

As the number of abortion providers shrinks, so will the availability of appointments. Merritt says certain clinics already have delays of up to four weeks.

“People who are lower income already struggle to afford their abortion care, but every week an abortion is delayed, it becomes more expensive,” Merritt says. “My deep concern is that folks are not going to be able to take time off work, and there’s always a concern over childcare.”

In 2019, Planned Parenthood opened a location in Fairview Heights, Illinois, as “an oasis for access,” McNicholas says, in anticipation of further abortion restrictions in Missouri and nearby states. The clinic now sees patients from as far as Texas.

For people who still can’t afford to make the trip — the unhoused, rural dwellers, undocumented folks, anyone who doesn’t earn enough to afford both travel and the procedure — the effect of an abortion ban will still be devastating, McNicholas adds.

“Some will be able to patch together a support system that gets them out of state, but for others, it will mean they are expanding their family or parenting when that isn’t what they want to do,” McNicholas says.

“Every year, we have higher rates of people that are seeking care who literally cannot meet their basic food and shelter needs,” King says. 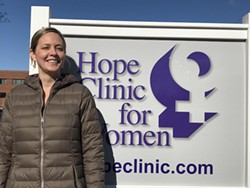 ALISON DREITH
Dr. Erin King is the executive director of Hope Clinic for Women in Granite City, Illinois.
This is why abortion funds such as the Missouri Abortion Fund exist.

The Missouri Abortion Fund partners with several abortion clinics to assist patients who cannot afford abortion procedures or the travel it would take to get to a clinic.

In 2021, the Missouri Abortion Fund assisted 1,866 Missourians with money for abortion care. Only two of those abortions were performed in the state of Missouri, according to board president Michele Landeau.

A total abortion ban in Missouri would mean all patients will likely have to pay more to travel farther. And as more states in the Midwest restrict access, getting appointments in liberty states will become harder.

“Those clinics that Missourians have been fleeing to for years are the same ones that everyone else from all these other states are going to come to as well,” Landeau says. “This is going to increase wait times and make people further along in their pregnancies, which will require more money, and at times, maybe more specialized care.”

An abortion ban will disproportionately affect Black residents the most. According to most recent data from the Centers for Disease Control, Black women comprise the largest percentage of the nation’s abortion patients at 38.4 percent.

“Pregnancy is really a life-or-death issue for thousands of folks, many of whom are low income,” Merritt says.

Merritt is also concerned about how the potential criminalization of abortion may affect minority communities.

If the Supreme Court indeed hands down its opinion as it’s currently written, Missouri’s Right to Life of the Unborn Child Act may be triggered by the state’s governor, attorney general or legislature. The act states “any person who knowingly performs or induces an abortion” is guilty of a class B felony, as well as a suspension or revocation of their license.

The act states that those who receive an abortion will not be subject to prosecution, yet whether the state considers those who take abortion-inducing medication at home as an “abortion provider” is unclear.

“When we talk about criminalization in Missouri, specifically in St. Louis, we are talking about communities of color, and immigrant and migrant communities that have already been hyper- surveilled and hyper-policed,” Merritt says. “There’s no way to not be concerned that people will be policed or jailed for their pregnancy outcomes.”

The Supreme Court is expected to make a final ruling on whether to overturn Roe v. Wade in June or July, but the decision could come sooner.

With a 20-year career as an abortion advocate, Merritt has warned for decades what will happen if abortion is taken away. Once a ban becomes a reality, she hopes it will at least serve as a wake-up call for government officials.

“People are going to feel this, and maybe that’s what we need,” Merritt says. “The Show-Me State is about to see exactly what happens when the entire Midwestern corridor, with the exception of one or two states, goes dark.”