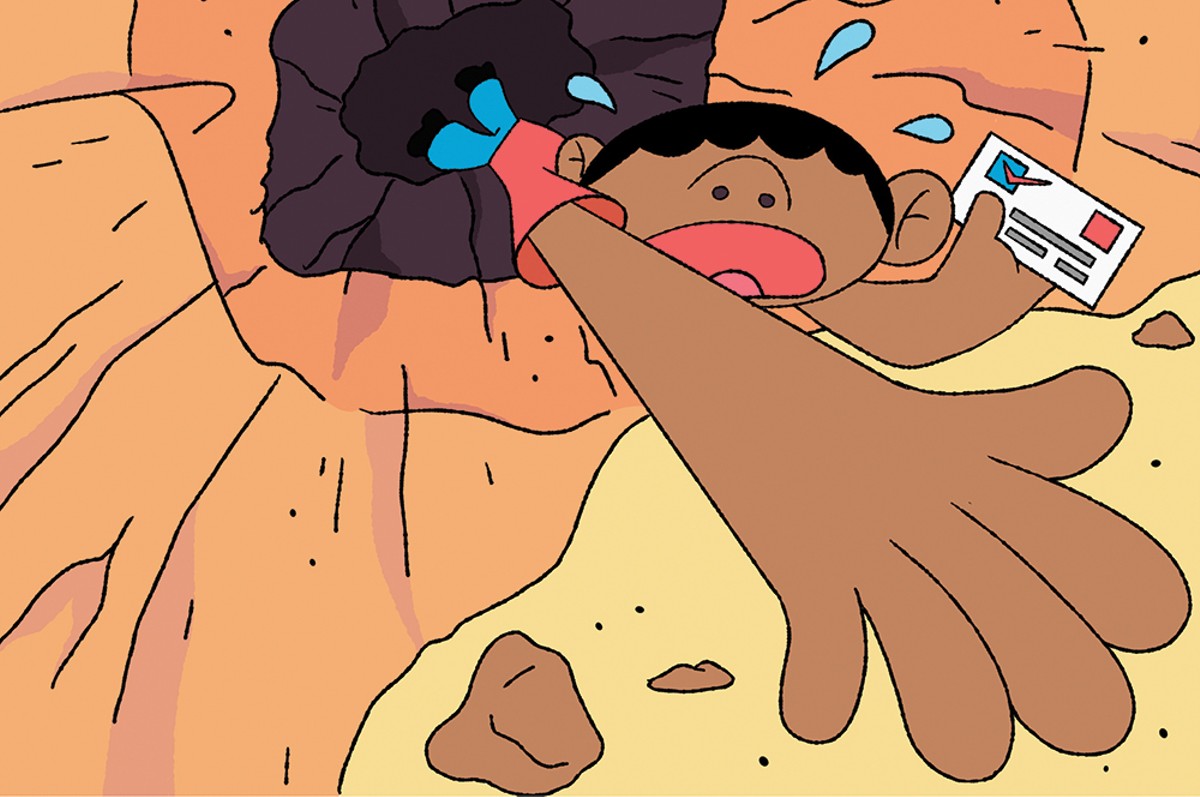 Lieberman's reference to the Civil War was no offhand comment. Dating back to its inception, Missouri has played a long and often unflattering role when it comes to voting rights. Famously, the Dred Scott case was tried at St. Louis' Old Courthouse, just a few blocks from where Blunt and Hawley now have offices. (The voting rights rally featured performing artist Peggy-Neely Harris acting out a scene drawn from the case.) The Supreme Court ruled against Scott and his wife Harriet in their bid for freedom in 1857. The decision undercut the Missouri Compromise, which Lieberman points out was itself a voting-rights decision, intended to maintain the balance of power between free and slave states. The Dred Scott ruling meant no Black men or women were guaranteed citizenship, and it helped lead to civil war. 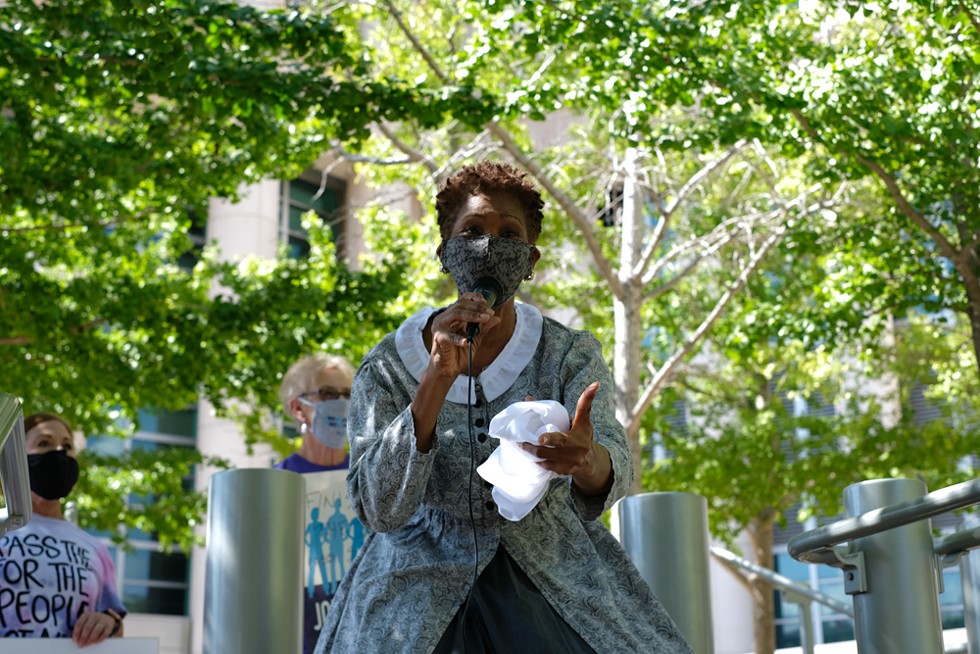 Less than twenty years later, the Old Courthouse again played host to a case with critical implications for voting rights. After Virginia Minor, an activist for women's suffrage, was blocked in 1872 from registering to vote in St. Louis, she sued through her husband, a lawyer. The issue eventually landed in the hands of the Supreme Court, which ruled against Minor, finding that the authority to recognize voting rights of women fell to individual states. Denied a federal solution, suffragettes shifted to a state-by-state strategy.

More recently, and relevant to today's landscape of cultivated distrust, St. Louis was the scene of voting fraud allegations that drew national headlines in 2000. Then-Senator Kit Bond accused city Democrats of stealing a Senate seat that year from Republican John Ashcroft in favor of the late Mel Carnahan, who had been killed in a plane crash three weeks before. Nearly 50,000 people, the majority of them Black, had been purged without notice from voting rolls heading into the election, author Carol Anderson recounted in the New York Times in 2018. In the ensuing election-day cluster of confused voters arriving to cast their ballots, a judge ordered polls kept open for an extra three hours to sort out the problems. The order was reversed in a rapid-fire appeal, but instead of decrying the disenfranchisement of multitudes of voters, Bond alleged massive fraud. The sight of him pounding his fist on a lectern while shouting about what an "outrage" it all was only intensified an ugly day. And Bond wasn't letting go.

"I think the evidence points very strongly to a major criminal enterprise," the senator later said at a news conference. "And if this, in fact, happened, if there is evidence of it, I believe prosecution of those who committed any of the acts in the conduct of a conspiracy to defraud voters should be brought to justice."

But there wasn't evidence. An examination of 2.3 million votes cast in Missouri in 2000 eventually turned up just six confirmed cases of ineligible people voting, including people who may have made a mistake. But the narrative carried forward. It is often seen as a key contributor to the genesis of "Stop the Steal" and other unsupported voter fraud claims that Trump used to shatter trust in the election system.

The specter of voter fraud, regardless of the type, has proven adaptable to any number of specific restrictions proposed as protections for election integrity. Conspiracy theories about stolen elections somehow become justification for denying people drinking water and food at poll lines. A Trump defeat in a red state is morphed into a need to replace the people in charge of counting votes. The thud of unpopular ideas is spun into redistricting.

Voting rights experts warn the country is facing a crisis, and the rapid upending of previously accepted values and institutions will cause disaster if left unchecked.

"The rhetoric is so overheated that I think it provides the basis for millions of people to accept an actual stolen election as payback for the falsely claimed earlier 'stolen' election," Rick Hasen, co-director of the Fair Elections and Free Speech Center at the University of California-Irvine, recently told Politico. "People are going to be more willing to cheat if they think they've been cheated out of their just deserts. And if [you believe] Trump really won, then you might take whatever steps are necessary to assure that he is not cheated the next time — even if that means cheating yourself. That's really the new danger that this wave of voter fraud claims presents."

Missouri Republicans started pushing early versions of the photo-ID bills back when Trump was a fake mentor on The Apprentice. But now it finds itself among of a growing wave of voter-restriction proposals filed by Republican politicians across the country. And experts worry that the sum of those many assaults on the trust of elections will have dire consequences.

"The typical response by a losing party in a functioning democracy is that they alter their platform to make it more appealing," Kenneth Mayer, an expert on voting and elections at the University of Wisconsin-Madison, told the New York Times. "Here the response is to try to keep people from voting. It's dangerously antidemocratic."

In Missouri, Republicans have repeatedly tried to implement a photo-ID requirement at the polls. Republicans have tried for fifteen years to make that happen, despite a pair of Supreme Court rulings in opposition. Earlier this month, state legislators began laying the groundwork for yet another attempt.

"It'll be Groundhog Day again in the General Assembly," state Representative John Simmons (R-Washington) promised at a September 15 hearing of the House Elections and Elected Officials committee. Simmons sponsored a photo-ID bill last session that passed the House but ultimately fell short of making it into law. He has yet to file an updated version for the upcoming session, but the House committee decided to take up the issue anyway in anticipation that Simmons or someone will try again.

Secretary of State Jay Ashcroft was among those who testified at the September 15 hearing. More than two decades after his father lost to Carnahan, Ashcroft is the state's top election official and a leading voice on the supposed potential dangers of widespread voter fraud. He recently suggested new changes he says would protect the integrity of upcoming elections, such as severely limiting vote-by-mail options and prohibiting election workers from helping voters fix minor problems on their ballots so their vote doesn't get thrown out. At the House committee hearing, he spoke in favor of requiring a photo ID.

"We're trying to make the law more secure but also make sure that everybody can vote that's legally registered," Ashcroft said. "It's that simple."

He concedes he has encountered few examples of actual voter fraud. The 2020 elections, which included expanded eligibility for mail-in and absentee ballots as a concession to the pandemic, were among the state's safest in Ashcroft's assessment. He has, however, sought to strictly limit such options in the future, claiming they leave the state's systems open to abuse. Among his only examples of alleged fraud are cases of two St. Charles men, who Ashcroft claims voted in 2020 in Missouri as well as Florida. In an August news release with the headline "Ashcroft Uncovers Voter Fraud and Demands Prosecution," the allegations are described briefly before a rapid transition to voter fraud writ large.

"Though Secretary Ashcroft is confident these isolated issues are not indicative of problems with Missouri elections, he continues to encourage the legislature to pass strong election changes that would deter and eliminate voter fraud," the news release says.

The release does not explain how the type of fraud that a driver's license might prevent — imposters voting under another's name — would have prevented one person from illegally casting two ballots under their own name.