Missouri Attorney General Fights School Mask Mandates, Because of Course He Does 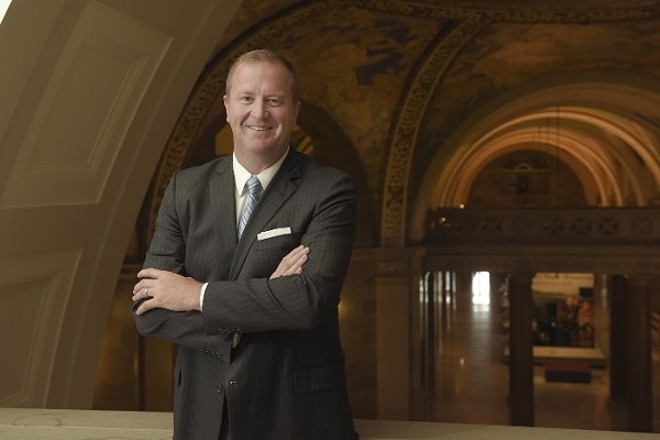 Missouri Attorney General Eric Schmitt's latest battle in the courts is dragging children into the mix. Schmitt filed a class action lawsuit on Tuesday morning to end mask mandates in public schools. In the suit, Schmitt points to “the science” as the cause to end the mask mandates.

Schmitt’s lawsuit, if successful, will end mandates in more than 50 school districts. It lists Columbia Public Schools and "all other similarly situated" as the defendant. Columbia Public Schools implemented a mask mandate as a preventive measure based on advice from medical experts. The city of Columbia has reported a total of 4,625 cases in kids nineteen and under since the pandemic began.

“Columbia Public Schools is extremely disappointed to learn that the Missouri Attorney General has chosen to pursue litigation against the school district,” Columbia Public Schools spokesperson Michelle Baumstark said in an emailed statement to the RFT. “The decision to require masks is not a forever decision. It is something currently necessary to keep our scholars safely learning in our schools.”

Baumstark went on to add that the health and safety of Missouri residents — especially its youngest citizens — should “always be the first priority of our great state’s elected leadership.” However, Schmitt argued in his press release that the data is on his side, not the district's.

“Forcing schoolchildren to mask all day in school flies in the face of science,” Schmitt began in a press release, “especially given children’s low risk of severe illness and death and their low risk of transmission.”

Yet, the claim about masking by Schmitt has been heavily disputed. The Missouri chapter of the American Academy of Pediatrics, a local pediatrician organization that has more than 1,100 members, released a statement Wednesday saying "masks are a medically proven, key public health tool in preventing disease transmission and we strongly recommend their use in schools."

The proof against mask mandates Schmitt cited in his lawsuit were multiple studies from before the delta variant became prevalent, an opinion piece from the Wall Street Journal and a majority of studies from European countries that have had stricter COVID-19 guidelines than Missouri.

Schmitt also claimed “the science” is showing children are not as affected by COVID. Yet, recent numbers are indicating the delta variant is impacting children in a way the initial virus did not. Over the weekend, 21 children — ranging from babies to eighteen years old — were in St. Louis Metropolitan Pandemic Task Force hospitals, according to data from the task force. Of those kids, seven were in the ICU.

As of August 25, the task force's hospitals saw a slight decrease from 21 to nineteen children, with two in the ICU. Local health leaders have also warned about the delta variant being cause for concern in children.

The spokesperson for Columbia Public Schools said the district is not alone in implementing mask mandates to protect the students from serious illness. Fourteen St. Louis County school districts are listed as other examples in the lawsuit.

Public schools like the Fox C-6 school district in Jefferson County instated a mask policy at a Board of Education meeting after concerned parents advocated for their kids. One student at the meeting, the only child who took to the podium, spoke in favor of a mask mandate at their school.

“It confuses and frustrates me that adults are making a big deal out of [mask mandates] when the kids just don’t care,” one seventh grader said at the school board meeting. “Masks don’t hurt my mental health. Quarantining and virtual schooling hurts my mental health.”

Jefferson County recently saw a 352 percent increase in COVID-19 cases with children and hasn’t seen much improvement, with these cases seeing the highest rate of increase.

Screengrab from YouTube
Laura Dresch, a parent from the Fox C-6 school district, speaks in favor of a mask mandate at a Board of Education meeting on August 17. She is the parent of two kids with compromised lungs and has an autoimmune disease, as well.
Laura Dresch, one of the speakers at the Fox C-6 district board meeting, tells the RFT she is angry about Schmitt’s lawsuit. As the parent of two high risk kids, with one struggling to thrive in an online environment last year, Dresch takes issue with more than just the ban on mandates itself.

“There’s a great lesson to be taught to our children of compassion and care and understanding and I think that what our attorney general is doing is completely blowing that lesson out of the water,” Dresch said. “We should be teaching our kids that our classmate could be sick and if they get sick [with COVID-19] they could die, so we’re going to wear a mask out of compassion.

When masks were not mandated in the Fox C-6 district, Dresch said the question was, “Do we put our kid in school so he can be successful in life or do we keep our son home to keep him alive?” That’s why she spoke out at the meeting and will continue to fight for the mask mandates when the Fox C-6 district re-evaluates their policy in 30 days.

If Schmitt succeeds in his efforts to ban mandates, Dresch’s kids would have to go back to virtual schooling, where she acknowledges that getting her son to pass his senior year online would be a difficult task.

She added that she believes the lawsuit is part of a political agenda and she doesn’t think this debate should have a political stance, that it should be about caring about others and saving lives.

Parents and school districts are not the only ones meeting Schmitt’s lawsuit with criticism. Both Missouri House Minority Leader Crystal Quade and President Joe Biden see the measure as a way for more children to become sick with COVID-19.

“This lawsuit might help Schmitt win a Republican U.S. Senate primary, but it puts the lives and education of Missouri children in jeopardy,” Quade wrote in her statement. “If Eric Schmitt successfully blocks local schools from adopting mask requirements, more Missouri children will get sick from COVID-19, forcing many school districts to return to remote instruction in order to contain outbreaks.”

Biden’s press secretary Jen Psaki said the president finds the lawsuit “unacceptable,” but Schmitt was adamant in a Twitter response that he wouldn’t “let Washington dictate what we do in Missouri.”

Columbia Public Schools, however, promised to not let Schmitt dictate what they do in their district without a fight.

“The decision to file suit against a public school district after a local decision is made in the interest of safety and keeping students in school will waste taxpayer dollars and resources, which are better spent investing in our students,” Baumstark wrote. “Columbia Public Schools intends to aggressively defend its decision to keep its community and its scholars safe.”