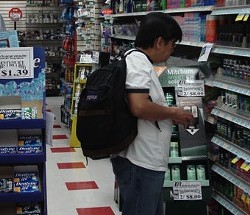 Update below: After a two-month investigation involving undercover visits to Walgreens stores across Missouri, the office of Attorney General Chris Koster is alleging that the company is illegally tricking customers with a pattern of "deceptive pricing" practices.

The charge -- brought forward today in a civil lawsuit against Illinois-based Walgreen Co., the largest drugstore chain in the U.S. -- is that the stores are advertising lower prices on display tags, but charging higher prices at checkout.

"Consumers have a right to expect the price they will pay at the register is the same as the price displayed on the shelf," Koster says in a statement. "The sheer volume of tags on the shelves makes it nearly impossible to recall the details of each offer. Consumers should not have to double-check the price tags or signage and compare them to the prices charged at the register."

Koster is drumming up attention for this suit today with press conferences in St. Louis, Kansas City and Springfield.

The allegations cover those three cities along with Jefferson City and Osage Beach.

The suit alleges that Walgreens is "engaging in false, misleading, and deceptive advertising and pricing schemes to lure consumers into purchasing certain products."

Koster's office apparently conducted "undercover visits" to eight random Walgreens stores in the five cities in question between June and July -- purhcasing a range of items. A news release explains:

Investigators discovered that nearly every store visited had pricing discrepancies in which the price of merchandise at checkout was greater than the displayed price for the product. Overall, investigators found 43 price discrepancies out of 205 purchased products, resulting in overcharges nearly 21 percent of the time.

The complaint, filed in Jackson County Circuit Court, alleges that Walgreens also offered a rewards membership program promising price reductions or savings at the register -- which investigators did not always receive.

Further, the suit says sale display tags were often inaccurate and left on shelves past their expiration date.

Koster's suit seeks an injunction prohibiting the company from engaging in these alleged schemes along with civil penalties and reimbursement for the cost of the investigation and prosecution.

Customers who want to report observations of deceptive pricing at Walgreens or other retailers can contact the office's consumer hotline at 1-800-392-8222 or online at ago.mo.gov.

Daily RFT left a message with a Walgreens spokesman today. We'll update if we hear back.

We have a 112-year history of acting in our customers' best interests, and that will continue to be our focus. While we won't comment on the complaint itself, we were disappointed and disagree with the attorney general's comments. However, we are prepared to have a constructive dialogue about the issues he raised and address any appropriate concerns.