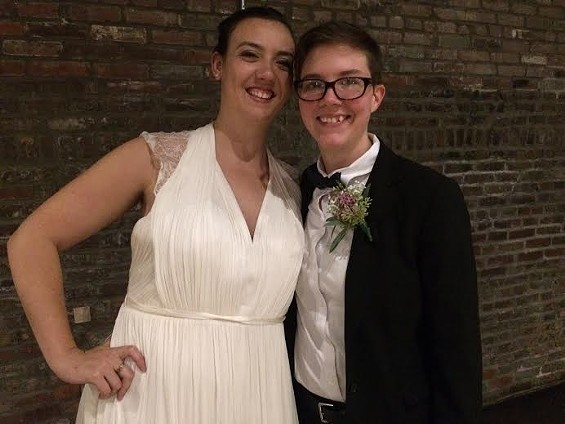 Lindsay Toler
Sadie Pierce and Lilly Leyh were the first couple to officially marry in St. Louis after a judge struck down Missouri's ban on gay marriage.

That's according to a new study from financial site NerdWallet, whose analysts crunched the numbers to see how America's $51 billion wedding industry will expand as the right to marry spreads. Consumer spending on same-sex weddings would add up to more than $2.5 billion nationwide if gay marriage is legalized throughout the U.S., the study says.

According to the 2010 census data for Missouri, 10,557 same-sex couples live in Missouri.

Predicting the economic impact of same-sex marriage on Missouri is complicated because the first year of legalization probably won't resemble future years, so NerdWallet's study takes into account the initial boom in demand.

"Marriage rates for the first couple of years after legalization are inflated due to pent-up demand," Jasthi said. "Additionally, many of the initial marriages were planned quickly and performed at a courthouse. When same-sex marriage has been legal for several years, our assumption is couples will be able to spend more time planning their weddings, and they spend more money on the ceremony."

An earlier study from the Williams Institute at the University of California-Los Angeles estimated that legalizing same-sex marriage in Missouri would bring in more than $36.6 million in three years, including $23 million in the first year alone. The study estimates that 50 percent, or 5,279 couples, would get married in the first three years after marriage legalization.

The Williams Institute also found that gay couples only have one-fourth of the budget typical straight couples spend on weddings, thanks to the heavy stigma around homosexuality and a lack of familial support. While a straight Missouri bride and groom shell out an average of $22,343 for their big day, gay brides and grooms will probably spend around $5,204.