Shortly after 2015's landmark Supreme Court decision Obergefell v. Hodges legalized same-sex marriage in the United States, rural Dent County in Missouri made unfortunate national headlines. While it didn't last long under massive public pressure, the county had decided the ruling was "an abomination" and voted to lower the flags at government buildings once a month for the next year.

This stuck in Dent County native Jacob Wilson's craw in a pretty major way, so he decided to start a scholarship fund for the LGQTBIA kids trying to thrive against such hatred. Days into his quest, Geneviève Steidtmann joined his efforts. Their plan was to raise $12,000 — $1,000 for each month the flag would be lowered. Donations poured in from around the globe and quickly surpassed that goal.

"Suddenly we were like,'Maybe we have a bigger responsibility here — what if we opened this to all of Missouri?'" says Steidtmann, now president of the executive board for the Missouri Courage Scholarship. Wilson and Tori Gale serve as vice presidents.

Support for the fund continued to pour in, and the nonprofit has been growing ever since. It partners with LGBTQIA and Pride organizations as well as high school counselors across the state, and they work with zero administrative overhead.

"This is our sixth year; we've now given out more than $130,000," Steidtmann says. "We're giving scholarships to trans kids who live in these tiny towns of 300 people. I don't know how they get through the day!"

This year, the review committee considered anonymous applications, including grades and essays, from 263 students. Scholarships went to 24 kids from across the state — including a few St. Louisans.

"I founded and ran an organization in my school district called Students for Progressive Change," says the Mizzou-bound Khan. "One of the things we wanted to change was our discrimination policy — it was really vague, not protecting anyone. We wrote our own policy and worked with the administration and the school board to be inclusive of gender identity and sexuality."

She was also recognized with The Princeton Prize in Race Relations in 2020. Khan works with a variety of local organizations including St. Louis Pro-Choice Student Activists and Planned Parenthood.

"Being born and raised in Missouri is a hard thing when you're LGBTQ," Khan says. "Being recognized in a scholarship like this, I'm incredibly grateful. It's OK to be who you are! It's an amazing thing to show other people what they can do." 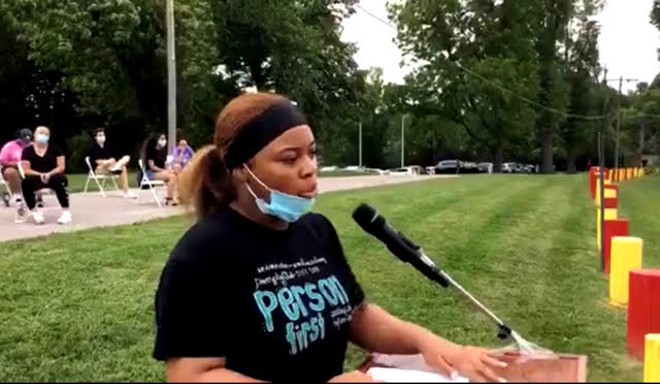 "Growing up in predominantly white schools and being one of the few, if not the only, Black kids in my class from first grade until my senior year of high school, I experienced more than I would like to say," says Alexander. "The murders of Michael Brown and George Floyd each time sparked a fire in me to make the difficult decision between courage and complacency."

As president of the school's Diversity Club her junior and senior years, Alexander worked hard to improve equity and inclusion at the school, expanding the group's mission statement. She also created affinity groups within the club, which came with some challenges at the Catholic institution.

"To be plain and simple, winning this scholarship means I am one step closer to my dreams," she says. "I displayed my passion for making a difference, without the expectation of any gratitude or grand prize."

Applications for next year's awards open in December, and you can donate anytime.