Missouri Gets $23 Million for Clean Energy 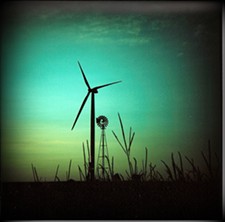 "As Congress continues working on comprehensive energy legislation designed to create new clean-energy jobs here in the U.S., I am pleased to see $23 million headed to Missouri today," says Carnahan in a statement today. "Missouri has presented a detailed plan quickly and because of that will be receiving funds that will save consumers money on their utility bills and put people back to work."

Among other things, the funding will go toward encouraging Missourians to reduce their energy consumption by increasing the energy efficiency of their homes, industrial facilities, agricultural operations, transportation, schools and local governments.

Hmm, wonder how much of that money -- if any -- will benefit Carnahan's brother, Tom Carnahan, whose Wind Capital Group owns four wind farms in Missouri?