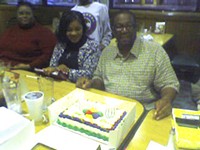 via http://www.missourigag.org/
Chuck Spearman of the Missouri Gospel Announcers Guild

The Missouri Gospel Announcers Guild had grown tired of its office space on Broadway, just north of downtown St. Louis. "Cars get vandalized a lot," admits Chuck Spearman, the organization's president. "There's a halfway house around the corner, and there's a lot of foot traffic." So they found some office space in Brentwood, a fifteen-minute drive into suburbia on I-64.

But after nearly three weeks of waiting for Brentwood officials to cough up a simple occupancy permit, Spearman and his staff are beginning to wonder: Are St. Louis' suburbs really ready to welcome a Gospel organization -- read: African-American organization -- to the neighborhood?

Spearman says he's racked his brains trying to think of any explanation, other than race, for the treatment his organization has been given. He even sent a letter to Brentwood zoning officials -- but got no response. "Race is the last thing you want to believe it is," he tells Daily RFT. "Not in 2011. Not in Brentwood."

But Ellen Rottjakob, the interim city administrator and the person who's been handling Spearman's case, says race had nothing to do with it. (She also says, for the record, she never received Spearman's letter.)

Rottjakob doesn't want to hazard a guess on how long such permits usually take or whether three weeks is unusually long. She says the site is zoned properly; the main question is whether there's enough parking.

But Spearman is skeptical. His staff, he says, will only be adding two to three cars, maximum, to the parking lot at 8049 Litzsinger during work hours. The area has so much superfluous parking, he says, workers from other office buildings routinely park there.

When he told Rottjakob that, he says, she told him she'd have to personally visit the site -- and that she'd do so in the next few days and call him after she did.That, he says, was March 28. But when he visited City Hall again, on April 7, he was again told that the parking spaces needed to be counted.

"This cannot be common procedure for businesses coming to apply for a license and occupancy permit," he writes in a letter forwarded to RFT and other media outlets. Even worse, he says, another week has passed without action and his letter to Brentwood went ignored.

In his letter, Spearman says he doesn't know if other minority businesses have faced the same challenges -- but he plans to consult a lawyer. "I will be reaching out to the multitudes and every office and media available to uncover the racism that's being practiced at Brentwood, Missouri, City Hall," he writes.

But that may not prove necessary. Rottjakob tells Daily RFT that she expects to get an answer to Spearman soon, possibly yet this week: "I meant to call him Monday, but we've been really busy this week. I hate to hear he's been unhappy with the process. We try to make things as easy as possible for businesses." Typically, Rottjakob says, Brentwood moves faster than other municipalities. "It's disappointing when we we hear that we haven't met up to our usual standards," she says. "We don't like to hear this, at all."