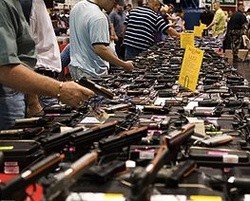 The Missouri GOP's effort to block federal firearm laws is once again receiving national scrutiny this week in advance of the upcoming showdown between Governor Jay Nixon and pro-gun lawmakers at the Capitol. The legislation -- which Nixon, a Democrat, vetoed -- would make it a crime to enforce any federal policies in the state that infringe on the right to bear arms. Nixon and other critics argue that it is very clearly unconstitutional for the state to pass a law directly contradicting the feds, while proponents say Missouri has an obligation to stand up to the president.

The New York Times editorial board is now weighing in, saying it's a case of "statehouse swagger" in the gun debates. Today's editorial -- which follows a lengthy story in the paper's news section on the legislation -- casts the bill as one of the most extreme of its kind in the country.

The renewed attention is timely given that Republicans may very well get enough votes to override the governor and implement the controversial law.

The editorial begins, "As a measure of the gun culture's dangerous sway over statehouse politicians, it is hard to top the pending proposal in Missouri that would pronounce all federal gun safety laws null and void in the state and allow the arrest of federal agents who try to enforce them."

In June, an Associated Press news report labeled House Bill 436, the "Second Amendment Preservation Act," as one of the most intense state's rights efforts in the country.

Part of the reason all eyes are on the legislation is that a handful of Democrats who support the bill may help the GOP make it a reality next month without the governor's approval.

This bizarre legislation, which Republican majorities hope to enact Sept. 11, would override an earlier veto by Gov. Jay Nixon, a Democrat, who noted the obvious fact that the measure is unconstitutional according to precedents stretching all the way to the Civil War.

But the bill's proponents care little for legal niceties, or for the near-certainty of an adverse court ruling against their hoary states'-rights gambit. Dusting off the polemics of nullification, the supposed "law and order" politicians in Jefferson City would rather support an unconstitutional measure than set a law-abiding example of government responsibility.

Some supporters of the bill respond to its critics by arguing that this effort is not so different from the legalization of marijuana in states like Colorado and Washington, which passed these laws in contradiction with federal policy. In its news report, the Times addressed this question, pointing out a key difference:

What distinguishes the Missouri gun measure from the marijuana initiatives is its attempt to actually block federal enforcement by setting criminal penalties for federal agents, and prohibiting state officials from cooperating with federal efforts. That crosses the constitutional line, said Robert A. Levy, chairman of the libertarian Cato Institute's board of directors -- a state cannot frustrate the federal government's attempts to enforce its laws.

While the supportive Democrats have gotten a fair amount of attention, State Rep. Jay Barnes has also received a lot of media as the sole Republican opposing the bill. Yesterday, Barnes published a post on his website reiterating his stance, writing, "The bill is plainly unconstitutional and has no chance of being upheld."

...there's not a single instance case in two centuries of constitutional case law in which a federal appellate court has upheld a single state's authority to (1) declare a federal statute unconstitutional on its own, and (2) criminalize the enforcement of a federal law by federal agents.

For more on the debate, check out Daily RFT's interview with a supporter who helped draft the language of the measure and our interview with a St. Louis lawyer who may sue if the override is successful.