Missouri Has Largest Racial Gap in the U.S. for Out-of-School Suspensions, ACLU Says 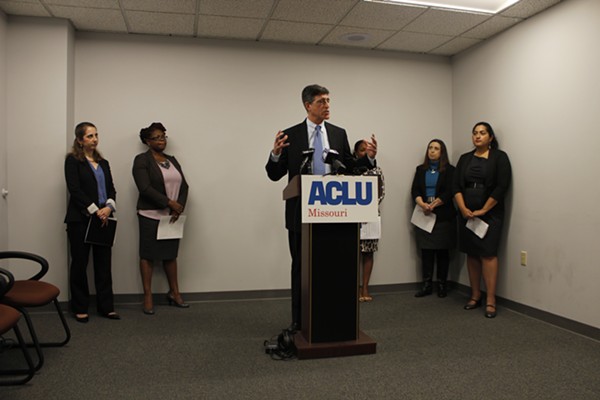 Katie Hayes
Jeffrey Mittman, executive director for ACLU of Missouri delivers closing remarks at a press conference regarding the ACLU's new report, "From School to Prison: Missouri's Pipeline of Injustice."

In 2015, the Civil Rights Project at UCLA found that the use of out-of-school suspension for elementary school children in Missouri is the most racially unbalanced in the nation. Now the American Civil Liberties Union, or ACLU, of Missouri has released a report highlighting the disparity, "From School to Prison: Missouri's Pipeline of Injustice."

Jeffrey Mittman, the nonprofit's executive director, opened a press conference to unveil the report this morning with a statistic."If you are a student of color, if you are an African-American student in the state of Missouri, you are 4.5 times more likely than your white counterparts to be suspended in schools. That is unacceptable," Mittman says.

The report uses data compiled from the U.S. Department of Education and all Missouri schools.

Sharonica Hardin-Bartley, superintendent of University City Schools, says these disparities have been prevalent for far too long.

"Unfortunately our discipline data mirrors what was just described," Hardin- Bartley says. "We must think differently about student discipline as schools and also learning organizations become more trauma-informed. Our practices must be more restorative in nature. The punitive measures simply do not work."

The report suggests that in-school suspension, if handled correctly, is much more effective for students.

"In-school suspension has benefits such as keeping the child in an educational environment, and providing an opportunity for restorative practices," the report says. And yet, the authors note, it too has its pitfalls: "Too often, [in-school suspension] is barely different from disciplinary seclusion, with a student being put aside in a room with no further instructional efforts made. Using in-school suspensions inequitably, and in this manner, does not produce better results."

Mittman says the goal is to solve this problem statewide.

"We will be working with selective school districts collaboratively, with administrators, with teachers, with students to come up with better policies," he says. "We will then expand the pilot program to more and more schools with the support of organizations, coalition partners and funders. We will solve this problem with a long-term solution."


Editor's note: A previous version of this story wrongly cited the original source of the statistics as research being done by the ACLU. It was actually done by UCLA. We regret the error.