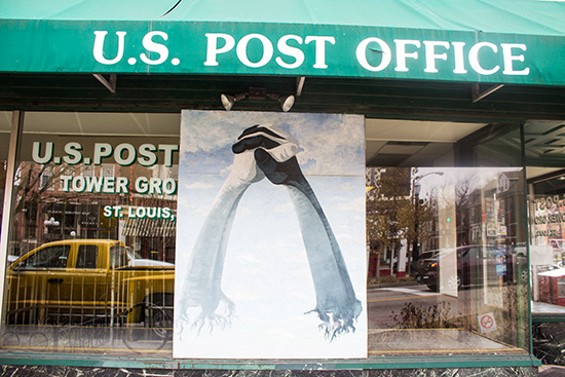 Mabel Suen
This mural over a window broken during demonstrations on South Grand is now at the Missouri History Museum as part of the Ferguson Collecting Initiative.

It didn't take long for staff at the Missouri History Museum to realize that the next major chapter of Missouri's history was unfolding all around them.

"I think everyone had a feeling that this was going to be an event that was going to change history," Chris Gordon, director of library and collections, tells Daily RFT. "We really felt like we needed to be in a position to collect this as it's emerging so we can give future generations the clearest picture we can of what is really happening right now."

Gordon says he's looking for "balance" in the collection, adding artifacts from all shades of the city- and nation-wide conversations that Ferguson started. A "Hands Up, Don't Shoot" sign has as much cultural significance as an "I Support Darren Wilson" shirt. An empty tear gas canister from the protests is as revelatory as a mural painted on plywood posted over a looted store's broken window.

"We're taking a snapshot of this time, of this period in time, that will capture all sides," Gordon says.

The MO History Museum braved the cold yesterday and picked up the murals!

And history is still in the making, Gordon says.

"It's still evolving," Gordon says. "I can see us collecting material for decades, really."

Artifacts gathered by the museum's Ferguson Collecting Initiative won't go on display immediately, though anyone who wants to study them could make an appointment with a curator. Gordon expects to see a small exhibit featuring some items at the museum in the near future and possibly a larger display during a civil rights exhibit planned for a few years from now.

Other museums can borrow artifacts from the collection for displays around the country. "We're really on the ground floor for this event and really trying to capture it as it happens," Gordon says. "We may only be seeing the tip of the iceberg right now."

The task of preserving today's history is a big change from the museum's typical routine. People usually come to the museum to research artifacts from decades or centuries -- not hours or days -- ago.

"As a historian, you study sources, primary sources, secondary sources, and you try to piece together an event and hope you're as accurate as possible," Gordon says. "This is a chance for us to collect as much as we can so we can facilitate that in the future. Future generations, even ten, twenty years from now, will get a better sense of what people were thinking, how they were reacting."

Want to donate to the Ferguson Collecting Initiative?