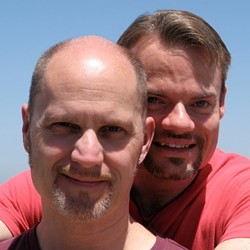 A change.org petition is in the works as angry comments continue to accumulate on the Facebook page for Research Medical Center in suburban Kansas City.

Yesterday news broke that hospital security forced a gay man from the bedside of his sick partner. In an interview with FOX 4 News, Roger Gorley says that he was visiting his partner, Allen Mansell, on Tuesday when one of Mansell's relatives asked that he be removed. When Gorley didn't budge, hospital security forcibly removed him in handcuffs. Gorley says a restraining order has since been filed against him barring him from visiting his partner.

Although Missouri does not recognize gay marriage, Gorley says that he and Mansell have been in a civil union for five years and share power of attorney over each other. Yesterday, Research Medical Center responded that it does not discriminate based on sexual orientation or race. It also issued a statement saying that "when anyone becomes disruptive to providing the necessary patient care, we involve our security team to help calm the situation and to protect our patients and staff."

But that hasn't stopped dozens of commenters from hammering the hospital on social media.

In 2010 President Barack Obama issued an executive order calling for hospitals to grant visitation rights to same-sex partners or risk losing Medicare and Medicaid funding. Now, in an online petition against Regional Medical Center, change.org is asking the president to make good on his vow. The petition states:

"The Obama administration and the Department of Health and Human Services has an obligation to enforce its executive order by investigating this matter and levying sanctions against Research Medical Center, up to and including the removal of federal funding."