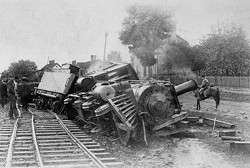 The passenger train route from St. Louis to KC as seen today and the foreseeable future.
Republican legislators today rejected an attempt to place into the state budget a provision for high-speed rail linking St. Louis to Kansas City.

Last month, Governor Jay Nixon announced that Missouri would bid for $1 billion in federal funds for high-speed rail after Florida's Republican governor rejected the same grant -- much to the delight of his Tea Party base.

Apparently, though, Nixon didn't count on conservatives in his own state derailing the plan.

Today the House Budget Committee rejected Nixon's attempt to get approval for the rail funds. As reported last month, Missouri would have to allocate $4.5 million in state money to get the $1 billion federal grant. For those keeping score at home, that's a 200 to 1 ratio of federal to state dollars. You play those odds.

The $1 billion would pay for upgrades to current track and land acquisition and designs for new high-speed rails. But fretting that the money wasn't enough for the full cost of the high-speed line, the House committee rejected Nixon's proposal.

The governor's office today told the Associated Press that it would continue to try to win the grant without the support of lawmakers. Whether that will scuttle the plans for high-speed rail in Missouri remains to be determined.