Image source
This eagle is out for revenge.
Three men from Scotland County, Missouri pleaded guilty last week in federal court to charges that they shot and killed a bald eagle and used leg traps to capture a great horned owl and a yellow shafted flicker.

(Obligatory pause for snickering over the words "yellow shafted flicker"...and we're back.)

The bird brains' names are Douglas Byrn, Logan Byrn, and Jerad Fuller. James Fuller, the father of Jerad, also pleaded guilty to attempting to intimidate a witness in the case.

The crimes occurred in March and April 2009 in northeast Missouri, near the Iowa border. Douglas Bryn, 55, trapped a great horned owl and Logan Byrn, 19, shot and killed the creature, which looks like this:

Image source
"My name is Inigo Montoya. You killed my father. Prepare to die."
During the same time period, Douglas Byrn also trapped a yellow shafted flicker, which, despite its silly name, is actually quite beautiful: 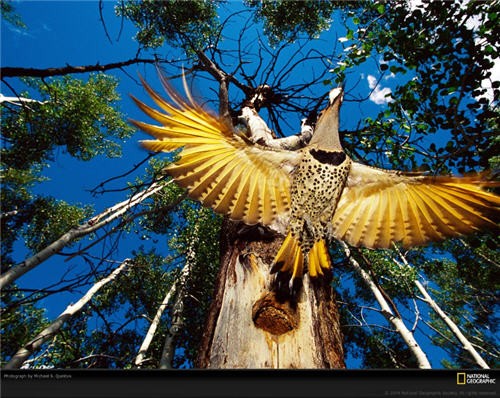 Why? Because they hate America, obviously.

The four men will be sentenced in October. They face sentences of up to six months in prison and a $15,000 fine for killing the owl and the flicker, violations of the Migratory Bird Treaty Act. The eagle killing carries up to a year in prison and a fine of up to $100,000.