After seven years, Connie Goodwin can finally bury her son 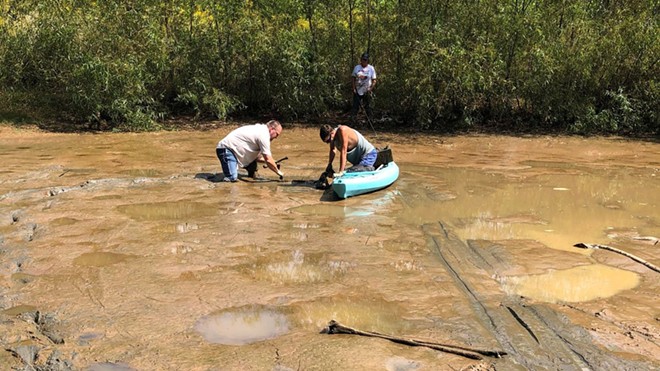 A Poplar Bluff woman says that on Saturday she did in two hours what local authorities hadn't been able to finish in seven years: bring her murdered son’s remains home.

Butler County Coroner Jim Akers confirmed to the RFT that over the weekend, Edward Goodwin’s remains were recovered from a pond northwest of Poplar Bluff, near the intersection of State Highway T and County Road 572.

Connie Goodwin, 57, tells the RFT that her family drained the unnamed pond themselves with rented machinery after five years of local law enforcement delaying a complete search of the pond.

"We kept pushing and pushing for them to drain that water," she says. "It's not the family's responsibility to do that."

Connie describes her son as, "a hard worker who made some bad choices but was a good person." He was 32 when he died in 2015.

But in June 2015 he didn't come by Connie's for several days. Then he missed a Fourth of July barbecue, which was highly out of character. She reported him missing the next day. 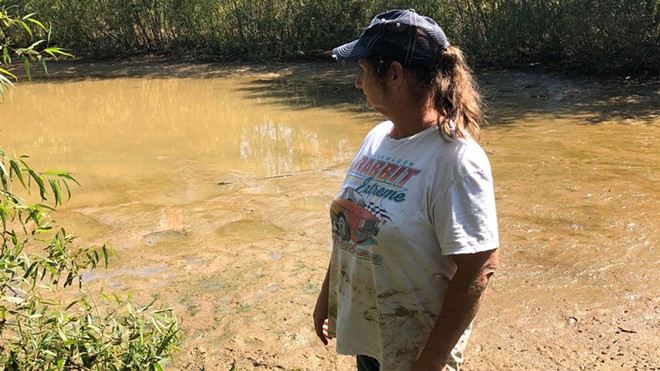 Both Connie and the Butler County Sheriff's Department came to suspect that Eldrid Smith and Rickey Hurt had killed Goodwin and left him in the pond off County Road 572.

"People can't keep secrets. Apparently there were people that witnessed this and word finally got out," Akers says.

Goodwin had known the two men since grade school, Connie says. They had worked together.

Butler County Sheriff Mark Dobbs told the Daily American Republic in 2015 that "there was a grudge over past drug transactions between Ed Goodwin and the group who eventually assaulted him."

In November 2017, the Butler County Sheriff's Department drained a portion of the pond and found partial remains of Goodwin.

"They drained it down to where it was just within a few feet of being completely drained, but you have all the sediment, all the mud," Akers says.

They found the pelvis and the femurs, which were enough to idenfity Goodwin and use as evidence to prosecute Smith and Hurt, wo are both currently serving time for murder.

Connie says the sheriff's department told her that they would return and finish draining the pond to recover the rest of her son.

Courtesy Connie Goodwin
The moment Connie Goodwin says she knew her son's remains had been recovered and he would soon be able to rest in peace.

But for five years, she says that time and again she was given a different reason as to why the job couldn't be done. "There was always a reason. Either because of other crimes going on or the weather," she says.

Connie estimates the pond was about 90 feet by 140 feet, the water about 4 feet deep. Akers describes the pond as having been "huge."

Last fall, the sheriff's department returned to the pond to drain it further, but were unable to get enough water out to recover Goodwin.

But Connie knew the majority of her son's body was still in the pond, unable to rest in peace.

So Connie and her husband rented a sump pump this weekend and got to work themselves. They were joined by Connie's grandson, Gage, 22, who is Edward's son.

The two previous attempts to drain the pond had lowered the water level significantly from its peak years ago.

They started pumping water out around 8:30 a.m. and two hours later saw what looked like bones sticking up out of the mud. Connie says that she then called Akers, who came out onto the scene.

The mud was two and a half feet deep. "When you're standing in it, it's like you can't move," Connie says.

Akers cautioned that the mud could be even deeper around Goodwin's remains, which were near the middle of what was now a muddy swamp.

“The next thing you know, my grandson, he's tall and slender-built, took off in a running stance through that mud. It was up to his knees." 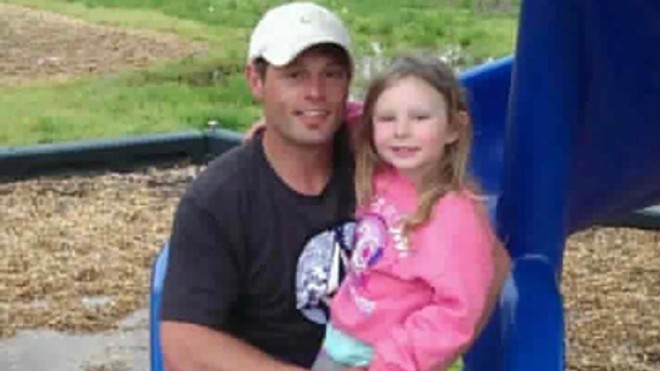 Courtesy Connie Goodwin
Edward Goodwin and his daughter. Edward was killed June 2015 and his family finished the recovery of his body this past weekend.

Seven years ago, cinder blocks and wire had been used to sink Goodwin's body to the bottom of the pond. Now, as delicately as they could, Akers and Gage hoisted the cinder blocks and the skeletal remains into a kayak with a rope attached to it, which Connie then pulled to shore.

"It was a sad day. It was a joyful day, too, because we could bring our son home," Connie says.

Connie says that in the wake of her son's murder, Gage had a particularly hard time. He was only 15 and had a very close relationship with his dad. She knows that he never could have imagined years later he'd pull his father’s remains out of a pond.

"[Saturday] night, [Gage’s] girlfriend told me she woke up, and he was asleep. He was shaking his hands, like you do after you wash your hands, shaking the water off. He was doing that in his sleep."

Savage Love: My Wife Never Wants to Hear About My Other Lovers