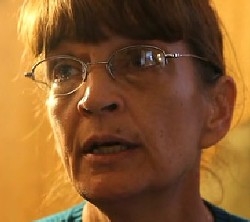 "She did what any good mother would do."

So says the attorney of Sherrie Gavan, a 54-year-old Jefferson County mother who was convicted this week of third-degree assault for attacking a 22-year-old man with a baseball bat.

What was her motive? She said the man was her son's drug dealer -- and had contributed to his heroin addiction.

Her explanation, however, apparently did not convince a jury the way she hoped it would. Check out her firsthand account of the incident below.

Here's a Post-Dispatch interview in which Gavan explains the events leading up to the assault.

"My mother's instinct took over," she told the paper. "I was scared. I was paranoid. I did not know what was going on."

The confrontation occurred, she said, after she had warned Joshua Loyd, the 22-year-old who had apparently done drugs with Gavan's son, now nineteen, to stay away.

But Assistant Jefferson County Prosecutor Jacob Costello made the argument to jurors that she broke the law, regardless of the circumstances, the P-D reports. "This case is not about whether Mrs. Gavan is a good parent. You can't take matters into your own hands like that.... She made a choice to pull out the baseball bat."

The mother told the paper, "I don't know what happens from here. I just know you can't protect your child anymore."

A sentencing hearing is scheduled for June 4.