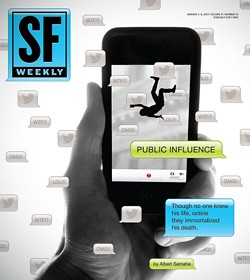 Our sister paper SF Weekly has a terrific feature story this week called "Public Influence" on the suicide of Dylan Yount, a Harrisburg native and Mizzou graduate who plummeted to a very public death from his apartment building.

Our own former RFT editorial fellow Albert Samaha tells the sad tale through the eyes of Yount's friends and family, but also through the tweets, Flickr, Yelp and Facebook statuses that documented Yount's final moments. Samaha also poses a disturbing question:

Did shouts from the crowd that gathered below actually convince Yount to jump?

The story traces Yount's life from small-town central Missouri to San Francisco, where he worked in the communications industry and accumulated the trappings of a successful life. But it culminates in a terrifying scene on the fourth-floor ledge of a commercial building in downtown San Francisco, where Yount stood for 45 minutes wearing only his boxer shorts. From the story:

Some people look on silently, hands over mouths. A teenage girl in a sundress wipes tears from her eyes. A circle of high school-age kids debate whether a fall from that height would be fatal. A woman in a pantsuit talks into her phone, excitedly describing the scene. Others peck away at keypads. More phones pop up above the mass, angling for a snapshot. A light buzz of chatter hums along, punctuated by a shout.

Heads turn, seeking out the class clown in the sea of faces. Laughter rising all around, compressed snickers and knee-slapping roars.

In between chuckles, a man in a blue button-down blurts, "He said 'Jump!'"

His female companion in black sunglasses replies with an enthusiastic cackle, "That's awful!"

The shouts come every few seconds.

A few people occasionally call "Don't do it!" But they are outnumbered.

As Samaha reports, Yount's mother Kathie sued the San Francisco Police Department for failing to silence antagonizers who challenged her son to jump.

Read the full story: "Public Influence: The Immortalization of an Anonymous Death." It's well worth the time.