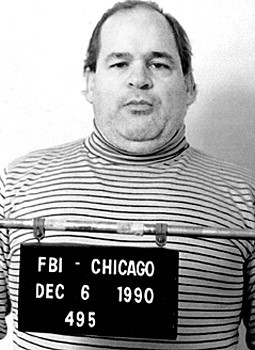 Calabrese earned the SAMs distinction after allegedly trying to order a hit on the prosecutor who successfully convicted him of being a Chicago mafia assassin and killing more than a dozen people over a career that spanned decades. Under SAMs, the 74-year-old Calabrese is to have zero contact with fellow prisoners inside the federal penitentiary in Springfield, Missouri, and limited interactions with others. The only people he can speak to are his doctors, lawyers, the warden and the priest.

And it's a priest who federal officials say aided Calabrese in the search for a rare Stradivarius violin -- perhaps once owned by Liberace -- that the mobster supposedly received as collateral for a loan. The violin would be worth millions and go a long way toward paying a judgment Calabrese owes to his victims' families.

Image via Chicago Tribune
Father Eugene Klein
In charges revealed yesterday, Father Eugene Klein of The Diocese of Springfield-Cape Girardeau was recruited by Calabrese during prison visits to help search for the violin that the mobster supposedly had hidden inside his former vacation home in Williams Bay, Wisconsin. The home was up for sale this spring to help settle the $4.4 million judgment against Calabrese.

Under the plan, Klein and two Calabrese associates were supposed to pose as interested buyers. While one of them distracted the real estate agent, the others were to search the home for the violin.

Per the Chicago Tribune:

In March, Calabrese told Klein about the violin, and Klein agreed to travel to Illinois to meet with the two undisclosed associates of the mobster, the charges allege. On March 7, Calabrese allegedly passed Klein a handwritten note through the food slot in Calabrese's cell -- a note that listed several questions for one of the associates and the location of the violin.

Klein allegedly met the two associates in Barrington in April to discuss finding the violin, and Klein made an appointment to visit the house with a real estate agent. It is not clear from the indictment whether Klein and the others kept the appointment or made the search, but Klein allegedly called the real estate agent to set up a viewing. The house sold in April for $285,000.

The violin would not be the first time Calabrese had hidden something inside his residence. Investigators found more than $1 million in cash and jewels hidden in the walls of his suburban Chicago home.