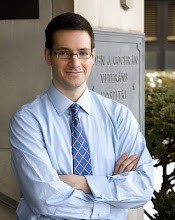 When Richard P. Martielli took the job as president of the Missouri Psychological Association last summer at age 33, he likely became the youngest person in the country to lead a state psychological association. As MPA president, he works on the legislative side of things, protecting and expanding the scope of the field and advocating for Missouri psychologists and their patients.

Martielli practices what he calls health psychology -- helping patients understand the root causes and related psychological symptoms of physical problems like pain, diabetes and obesity. Since 2007 he's worked in the primary care unit of the VA St. Louis Healthcare System's John Cochran Divsion, working to integrate treatment by eliminating the disconnect between mind and body. He uses behavioral therapy to help vets out with things like poor sleep, smoking and overeating. Because he works in the same hallway as physicians, veterans don't need to schedule an appointment to be seen by him following a medical exam.

These days, one of the biggest things on Martielli's to-do list as MPA president is to lobby for Missouri House Bill 1509, which would mandate health insurance coverage for eating disorders. (Currently, Missourians seeking treatment for eating disorders have to pay out of their own pocket, and insurance case managers have little training in eating disorders.) According to the nonprofit National Association of Anorexia Nervosa and Associated Disorders, Inc., there are at least ten states with active eating disorders legislation.

Following is a Q&A.

Can you give a brief overview of the proposed bill?

This bill would mandate that insurance companies provide treatment for eating disorders, specifically anorexia, bulimia and the diagnosis called 'Eating Disorder Not Otherwise Specified.' It's similar to the recent Missouri autism bill [House Bill Nos. 1311 and 1341, signed into law in 2010], which mandated that insurance carriers provide autism treatment coverage.

Statistics show that eating disorders have the highest mortality rate of any psychiatric disorder. Anywhere from 6 to 20 percent of individuals diagnosed with an eating disorder will die. It's Number-1. So with this bill, we're saving lives here, making it different from the autism bill.

On the House side it was Representative Rick Stream [R-Kirkwood]. He's been passionate about this because an eating disorder has personally affected his family. On the Senate side [Senate Bill 634] is sponsored by David Pearce [R-Warrensburg]. The proposal has been on the floor for about the past four years. Each year they've been chipping away, making progress.

Our organization has a lobbyist who makes a quick determination as to whether each bill proposed in the legislature would have an impact on Missouri psychologists. In its current format the eating disorder bill specifically mentions American Psychiatric Association best practice guidelines, which is fine, but we want people to understand the multi-disciplinary approach. We're working on an amendment to include not only psychiatrists, but also psychologists, social workers, dieticians, physical therapists and occupational therapists. On April 4 a group of twenty of us went down to Jefferson City to meet with sponsors. They're amenable to it, and we're working on the language.

What are the challenges?

When the autism bill gained traction, you saw bumper stickers about being so proud of advocating for that disorder. There were charity walks and benefits and people saying 'my son has autism.' With eating disorders, there aren't any bumper stickers. People like to cover it up and don't admit it happens to their families, which is part of the reason it's an uphill legislative battle.

Right now, treatments are available for people who want them, but they pay out of pocket and it's hard to get your foot in the door. There are ranches in places like Malibu that cost eight-thousand dollars a day. But they're not always basing their interventions on empirical, evidence-based treatments so there's no correlation between cost and results. Plus, so many people afflicted with this disorder can't afford Malibu. We've got to make this accessible to as many people as possible.

What will the costs be?

We're working on creating an actuarial analysis, which asks that question. Obviously the biggest opponents to the bill are the insurers, who are looking at the bottom line. They used the same argument with the autism bill. But the cost of the autism bill amounted to less than 1 percent of the costs for all private health insurance claims. So the insurers are putting up this fight as if these types of bills will bankrupt them, and we're like, really?

I can say with confidence that in the current setup, patients usually wait till they're at death's door to get treatment. They're 85 pounds, dehydrated and about to go into shock. They go to the ER, where the doctors give them IV fluids and prevent them from dying. Then they go home. But the next week they're back again, so it becomes a revolving door. The highest health care costs come from ER visits and inpatient hospitalizations, so we're just saying this bill would save money by switching from acute inpatient treatment to ongoing outpatient treatment.

Why does Cognitive Behavioral Therapy work so well with eating disorders?

Cognitive-behavioral therapy is the main evidence-based treatment for eating disorders. You can't put someone on Prozac and cure anorexia, you need talk therapy. For the most part, eating disorders have to do with distorted body image, and distorted feelings about food and the patients' own beliefs of who they are as people. CBT helps them change their maladaptive belief systems into adaptive belief systems.

Do you have an opinion with what's going on at the Castlewood Treatment Center [a Ballwin-based eating disorder retreat house whose director, Mark Scwhartz, recently got sued by two former patients who accuse him of using hypnosis to induce false memories of cannibalism and Satan-worshipping]?

I think the bigger issue to highlight is the need for eating disorder facilities to be transparent and demonstrate that their treatments are based on empirical evidence. With talk therapy we're not pulling anything out of the air. We're not brainwashing or hypnotizing you.