Send a News Tip
At the Daily RFT, we're pretty skeptical of silly lists proclaiming that St. Louis is the sixth-manliest city in the country, or Missouri is the twenty-fifth stupidest state, or whatever. 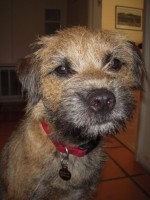 Proposition B is for the dogs.
On the verity of one survey, though, we're utterly convinced: Missouri really does appear to be the puppy mill capital of the United States. Thirty percent of federally licensed dog breeders are based here. And, as Barbara Schmitz of the Missourians for the Protection of Dogs, explains, they didn't choose this location for the glorious weather: "Right now it's perfectly legal in Missouri to have a dog the size of a beagle in a stacked wire crate the size of a dishwasher for her whole life." Our state lacks the regulations necessary to stop breeders from enslaving their dogs.

But here's the good news: In November, we now have a chance to change that.

Secretary of State Robin Carnahan announced today that -- along with an initiative related to earnings taxes -- an initiative to stop puppy mills has been officially approved for the November ballot.

According to the secretary of state's office, voters could decide to do the following:

Voters are likely to agree. Schmitz points to a recent poll showing a staggering 89 percent of Missouri voters support Proposition B. "Most people love their dogs," she says.

That doesn't mean everyone's on board. (See, for example, the Missouri Federation of Animal Owners.) "There are definitely some people opposed to our measure, but we think that's a good thing," Schmitz says. "It means what we're doing will make a difference."

The initiative, if approved, would cost Missouri $654,768 -- and, perhaps, our title as Puppy Mill Capital of the Country. Hard to get too worked about that one.