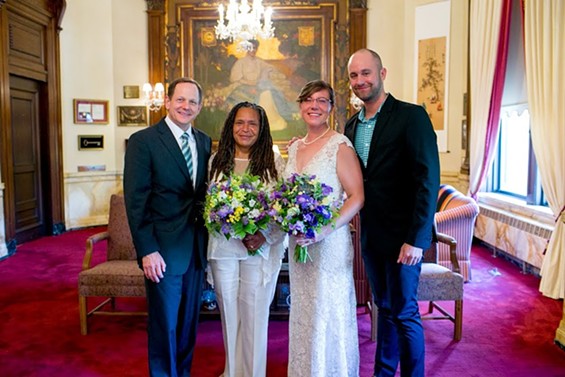 Courtesy of the mayor's office
Miranda Duschack and Mimo Davis are the first lesbian couple to be married in Missouri.

One of the three legal challenges against Missouri's ban on gay marriage will move up to a federal court at a time when federal appellate judges are knocking down same-sex marriage bans state by state.

Attorney General Chris Koster intervened in the case and bumped it out of state court and into a federal court, according to the Associated Press.

"We wanted at least one of the cases (from Missouri) to be considered in a court of broader jurisdiction," Koster spokesman Eric Slusher tells the AP.

The lawsuit -- filed by the American Civil Liberties Union earlier this summer on behalf of two same-sex couples who were denied marriage licenses in Jackson County -- alleges that Missouri's constitutional ban on gay marriage violates equal-protection and due-process rights under the U.S. Constitution. Similar arguments from other states have resulted in judges ruling that bans on same-sex marriage are unconstitutional.

The change in venue does not affect the other two cases pending from Missouri, including another ACLU lawsuit filed on behalf of eight same-sex couples and a lawsuit against the St. Louis City Recorder of Deeds for illegally issuing four marriage licenses for four same-sex couples.

But all this legal maneuvering may not matter in the end. By the time the lawsuit works its way through the courts, the U.S. Supreme Court may have already decided on the constitutional right to same sex marriage. The court is expected to hear a case out of Utah and could make a ruling as early as June.

"We're very much at square one," ACLU attorney Tony Rothert tells the AP. "It's unlikely that this particular marriage-license case will be decided before the U.S. Supreme Court tells us the answer" to challenges in other states.

Nineteen states and the District of Columbia allow same-sex couples to wed.