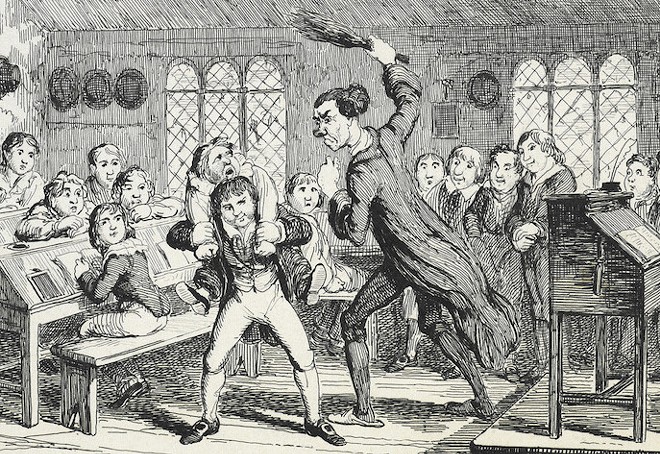 Wikipedia
We're pretty sure this isn't what the Cassville Schools look like.

A school district in southern Missouri is making headlines for bringing back corporal punishment. The school board for Cassville Schools in the Barry County district approved the new policy and notified parents in June.

Parents must opt-in to having corporal punishment used on their child. The punishment would be administered by a principal in front of a witness. The policy states that a child's buttocks can be struck with a paddle, but striking other parts of the body, such as the face, is not be allowed.

The superintendent for Cassville, Merlyn Johnson, told the Springfield News-Leader that young kids would get struck one or two times while older kids could get struck up to three times.

While the tactic may seem antiquated, Cassville actually allowed corporal punishment in school up until 2001. In 1977, the U.S. Supreme Court deemed corporal punishment constitutional, but it is outlawed in 31 states. It remains legal in Missouri and 18 other states including Alabama, Florida, Mississippi, Georgia, Texas, Wyoming, Arkansas, Kentucky and Oklahoma.

Johnson told the Springfield News-Leader that the change in policy was due to parents asking him why their kids were not getting paddled in school. With enough requests, Johnson began looking into it as a disciplinary measure.

"We've had people actually thank us for it," Johnson told the Springfield News-Leader. "Surprisingly, those on social media would probably be appalled to hear us say these things but the majority of people that I've run into have been supportive."

The school district has 1,900 students and Johnson said that he hoped the measure would act as a deterrent. And it could serve as an alternative to out-of-school suspension.

"The kid stays in the classroom and learns. When they are suspended, they are not with the teacher anymore," he said. "A lot of times when kids are out-of-school suspended, they don't have the opportunity to make up that work. They get zeros and that is not what we want."

The paddling is in conjunction with other discipline strategies including banning cell phones and other internet-capable devices from the classroom.

Johnson also said that at the end of the year, the administrative team will reassess if the corporal punishment worked and implement other discipline strategies if it did not.

Note: This article has been updated.