Missouri Senator Tells JeffCo to Avoid St. Louis, Really Sticking It to Us 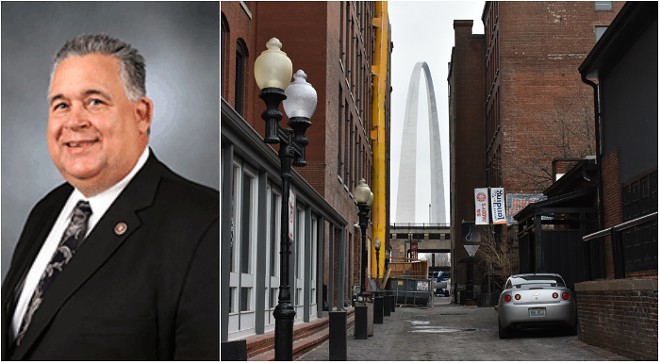 MISSOURI SENATE/DOYLE MURPHY
State Sen. Paul Wieland is advising Jefferson County Residents to stay out of St. Louis — for their own safety.

A state senator from Imperial has issued a "travel advisory", urging his Jefferson County constituents to stay out of St. Louis. And, well, are we supposed to be angry about this?

In an Independence Day Facebook post, Republican Sen. Paul Wieland runs through a list of dangers, but he is apparently pretty pissed about protests and a new mandate to wear masks.

"In addition to crime, leaders of both St Louis City and County have mandated that everyone must wear mask as they have apparently lost control of the corona virus outbreak," Wieland writes. "If the situation there is that dire, I would suggest Jeffco citizens refrain from traveling or shopping in those areas. Until an 'all clear' is sounded it would be safer for everyone to shop Jefferson County first."

We suppose it's possible someone in St. Louis was really looking forward to Wieland and his followers coming to visit. And this will undoubtedly make those theoretical people very sad. (Seriously, they'll be very, very, very sad, Senator.) But we keep hearing that everyone should do what makes them comfortable. As the Riverfront Times' Daniel Hill recently noted, if you're scared to wear a mask, you probably should stay home.

And we get it, there is more that frightens you than working together against a pandemic to prevent thousands of unnecessary deaths and avoid absolute economic collapse.

"In the last few weeks we have seen Catholics praying at Art Hill attacked, mobs of protesters vandalizing property, trespassing on private property, blocking interstate highways and on Thursday a young lady was attacked at a Metro-link station," Wieland writes.

Crime is scary, and it is only committed by people from St. Louis. And while the specter of people wantonly attacking praying Catholics at the King Louis IX statue on Art Hill was pretty well debunked, it can be confusing when conspiracy theorist Jim Hoft of the Gateway Pundit — only a few people think he's "the dumbest man on the internet" — drives the narrative.

Truly, Senator, you'll be safer in Imperial. We all saw what happened to Mark and Patricia McCloskey, who you will certainly agree, had no other choice but to leap up from their dinner outside of their palace, grab their guns and point them at the "mob" of people marching on the sidewalk past their home. Just look what happened to their neighbors who stayed inside their houses.

"As long as St louis City refuses to protect the public, and allows this lawlessness to flourish, I am advising my family, friends and the law abiding people I represent to avoid traveling to or through St. Louis City," Wieland writes.

The gentleman from Imperial will be sorely missed.