The female victim at the center of a disturbing federal indictment involving a Missouri woman who was coerced and tortured into becoming a sex slave reportedly appeared on the cover of one of publisher Larry Flynt's magazines.

The publication in question was the July 2007 edition of Taboo, an S&M fetish magazine that's part of the Flynt media empire. The unnamed victim also appeared in the August 2008 issue of Taboo along with an interview and photographs of her "owner" Ed Bagley Sr. of Lebanon, Missouri.

Bagley, 43, is accused of taking the now 23-year-old woman when she was a 16-year-old runaway and forcing her to become his sex slave. Among the allegations: that Bagley sewed up the woman's genitalia, waterboarded her and threatened to kill her.

The Los Angeles' website The Wrap reports that Bagley and the victim were contacted in 2006 by bondage photographer Ken Marcus, who discovered them on a website devoted to sadomasochism.

Marcus then invited them to California for a photo shoot. Those pictures later appeared in Taboo. 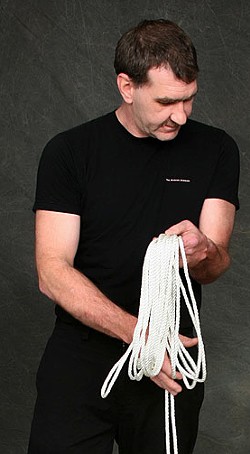 thewrap.com
Ed Bagley Sr.
Marcus tells The Wrap that the FBI interviewed him and the editor of Taboo, Ira Levine, earlier this year. As far as Marcus could tell, the female victim was not mentally disabled -- as prosecutors argue in the indictment.

"They say she was of diminished mental capacity, we never saw that whatsoever. She seemed to be bright, intelligent and in control, able to say 'yes' and 'no,'" Marcus told The Wrap. "They actually seemed to be quite a lovely couple ... if anything he was going out of his way to make sure she was as happy as possible. I was very shocked to see the government had any issue with them at all."

Marcus says he cooperated fully with authorities and doesn't know whether he may be called as a witness should the criminal charges go to trial. No charges against him or Taboo magazine appear likely.

Also named in the indictment was Bradley Cook of Kirkwood, as well as three other Missouri men.