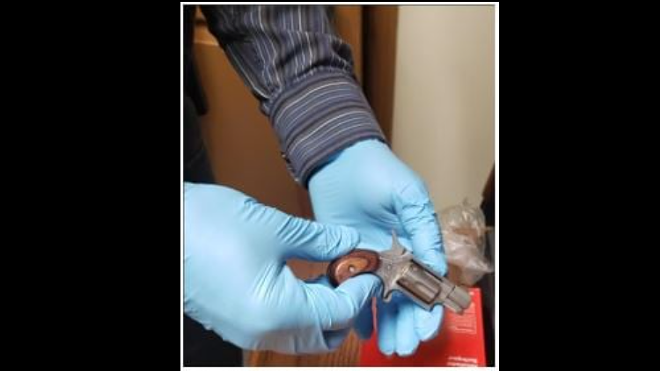 VIA BOONE COUNTY SHERIFF'S OFFICE
An actual photo of the (frankly adorable) gun police say a Missouri inmate smuggled into a county jail.

The Boone County Sheriff's Office says a small gun that was found at the Boone County Jail was smuggled into the facility in a body cavity of a female inmate.

According to a press release, jail staff found the firearm, a dainty little North American Arms .22 caliber revolver, in a housing unit at the facility. After an investigation, officials say they developed probable cause to believe the tiny weapon had been brought in by Amy Natasha Wilhite, a detainee who is being held on a slew of charges including felony counts of possession of a controlled substance, unlawful possession of a firearm and resisting arrest.

Officials say Wilhite was picked up on February 14, when she was searched by the arresting agency, and no gun was found. After that a detention sergeant at the jail did a pat-down on Wilhite, and another officer performed a strip search. No weapon was found in any of those searches, either.

But then, on March 3 around 1 p.m., officers found the gun at the jail. Police believe Wilhite smuggled it into the facility in a body cavity, and then stashed it with her stuff.

Wilhite has since had a charge of delivery or possession of a weapon at a county/private jail/corrections center — a class B felony — added to her charges.