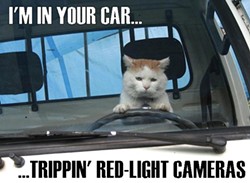 This photo proves that prosecutors never know who for sure ran that light...
The Missouri Supreme Court today ruled that the way Springfield enforces red-light camera tickets violates state law.

In a unanimous opinion, the justices sided with Adolph Belt, a retired highway patrolman, who disputed the way his camera citation was tried through an administrative hearing and not a court of law.

As the Springfield News-Leader reports, the court ruled that red-light camera citations should be funneled through the criminal court, which demands a higher burden of proof and allows for appeals.

In response, American Traffic Solutions (ATS) -- the company that operates and owns St. Louis' red-light cameras but not the Springfield cameras  -- issued the following response:

This case applies only to the City of Springfield and more importantly the case was never about intersection safety camera programs or their constitutionality. This case is about a municipal administrative process that is unique in Missouri to the City of Springfield. No other Missouri city with an intersection safety camera program uses the Springfield administrative process or Springfield's camera company. Other Missouri cities use the type of judicial process which was validated by today's decision.

This ruling is only about whether a city government may establish administrative procedures to handle various municipal violations rather than a judicial process, as state law requires. The Missouri Supreme Court was not presented with a challenge to the constitutionality of using intersection safety cameras. And to date, every court in the country, both federal and state, has upheld the validity of intersection safety camera programs when confronted with the merits of their constitutionality.

A federal court decision in St. Louis last year upheld the constitutionality of intersection safety cameras. And as Chief Judge Frank Easterbrook of the U.S. 7th Circuit Court of Appeals wrote last year in a decision validating the constitutionality of Chicago 's safety camera program: "No one has a fundamental right to run a red light." (Idris v. City of Chicago , U.S. 7th Cir., No. 08-1363, decided Jan. 5, 2009).

Meet the Man Who Won His Trial vs. Red-Light Cameras in St. Louis