The tax cut largely benefits the top 1% of Missouri earners 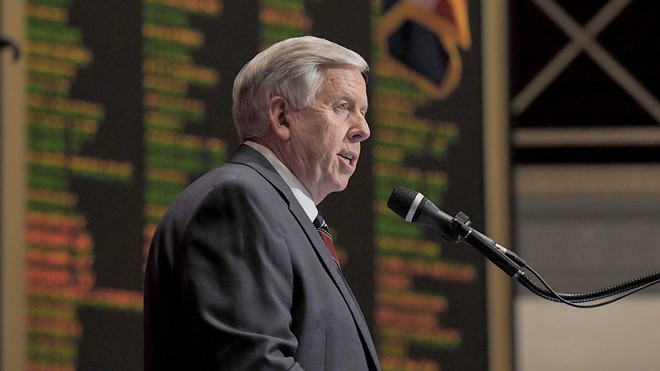 TIM BOMMEL/HOUSE COMMUNICATIONS
Governor Mike Parson called for a special session of the state legislature to pass the tax cut.

Yesterday the Missouri House of Representatives passed a bill cutting income tax in the state, sending it to Governor Mike Parson's desk for signature.

The top income tax rate in the state is now 5.3 percent. The new bill cuts it to 4.95 percent and would continue to lower the rate in four additional steps down to 4.5 percent, so long as there's acceptable state revenue growth.

According to the Associated Press, Missourians with an annual income between $66,000 and a $110,000 will have around $120 shaved off their annual income tax burden immediately. That number will increase to $275 per year when the 4.5 percent rate is reached.

An individual pulling in $1.6 million per year will save $4,200 immediately, and $9,500 when all the provisions of the law have been implemented.

In August, Governor Mike Parson called for a special session of the state legislature, asking them to pass these cuts. Parson wanted the state's top income tax rate to be lowered to 4.8 percent.

The top income tax rate is paid by those who make more than $8,968 in taxable income every year, according to the Missouri Department of Revenue.

At least one Democrat representative, Tracy McCreery (D-Olivette), voted for the bill. And at least one Republican had criticisms of the bill despite voting for it.

“Please do something that’ll impact real people, the people who cannot afford to pay their taxes,” Representative Bill Kidd (R-Buckner) told the Associated Press. “If you’re in the $100,000 to $200,000 range, then you’re going to like this tax cut. But if you’re a poor person or a fixed-income (resident), this doesn’t do it. That’s the truth.”

Prior to the bill's passage, Representative Peter Meredith (D-St. Louis) wrote on Twitter, "Top 1% of earners in Missouri would save avg $15,000/year. Bottom 20% of folks that make enough to owe income tax would save $10 a year. Plus almost 30% of folks who don’t even make enough to get a penny from this cut. So again, who is this tax cut for?"

Before passing the tax cut bill, the House abandoned a proposal that would have eliminated corporate income taxes in the state.