Missouri's Access to Abortion Is About to Expand Dramatically 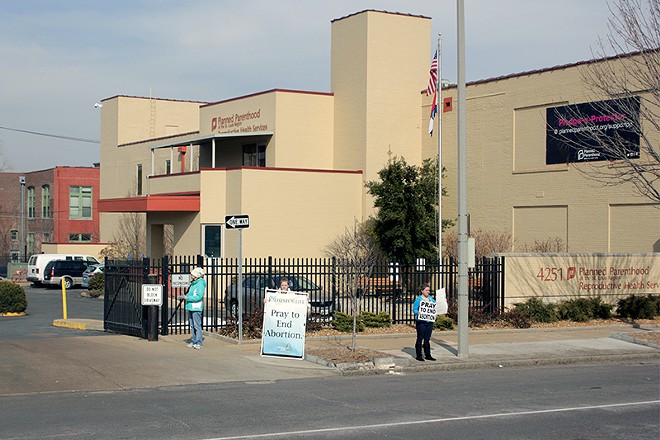 PHOTO BY DANNY WICENTOWSKI
For years the state's only abortion clinic was in St. Louis.
The number of abortion-providing clinics in Missouri is about to triple — from one to three. This month, for the first time in several years, the Planned Parenthood locations in Kansas City and Columbia will include abortion among their services, although only the Columbia clinic will offer the surgical procedure.

And that's only the beginning. Clinics in Joplin and Springfield are still awaiting state inspections, says Jesse Lawder, a spokesman for Planned Parenthood of St. Louis and Southwestern Missouri. Those locations are expected to become the state's fourth and and fifth abortion providers.

While the Columbia location has passed a health inspection, Bonyen Lee-Gilmore, a spokeswoman Planned Parenthood Great Plains, said the clinic has not yet received its license. "The state indicated that we should be receiving our license in the next day or two," she says.

Missouri has some of the strongest anti-abortion laws in the country, and for years the only source for abortion services in the state could be found in St. Louis, at the Planned Parenthood clinic in the Central West End. For now, thanks to a key court ruling, that era appears to be over (more on that in a minute).

Ironically, this expansion of abortion services comes at a time when Governor Eric Greitens has declared his intention to "[fight] for the lives of the innocent unborn." In July, Greitens called a special legislative session for the explicit purpose of passing new abortion restrictions, and soon after the governor triumphantly signed a bill into law that required women seeking abortion to meet with a physician — not a clinic staff member — three days before having the procedure.

At the time, the sponsor of that bill, state Senator Andrew Koenig (R-Manchester), claimed that the mandatory counseling by a doctor was "common medical practice." To abortion rights activists, however, the requirement was an obvious attempt to legislate reproductive rights by over-burdening the handful of busy doctors who actually perform the procedures.

The irony, however, is that while Greitens and Koenig celebrated the passage of the bill, a very similar argument, about protecting the "health and safety of women," utterly failed to sway U.S. District Judge Howard Sachs earlier this summer — resulting in the ruling that is, at this very moment, allowing two additional Planned Parenthood clinics to begin offering abortions in Missouri.

As abortion rights activist predicted, the courts tend to take a dim view of laws that effectively dismantle access to abortion services. Last year, in a landmark ruling, a federal judge blocked a Texas law mandating that abortion doctors have admitting privileges at nearby hospitals and that clinics be outfitted to the standard of an ambulatory surgical center.

Similar laws were also in place in Missouri, and so Sachs blocked those restrictions. In May, he slapped aside the state's arguments defending laws that judge described as "burdens that have closed or prevented development of clinics."

Those burdens, Sachs wrote, deny Missouri women the abortion rights guaranteed by the constitution. With the new abortion services coming online soon, those rights are on the brink of being restored.