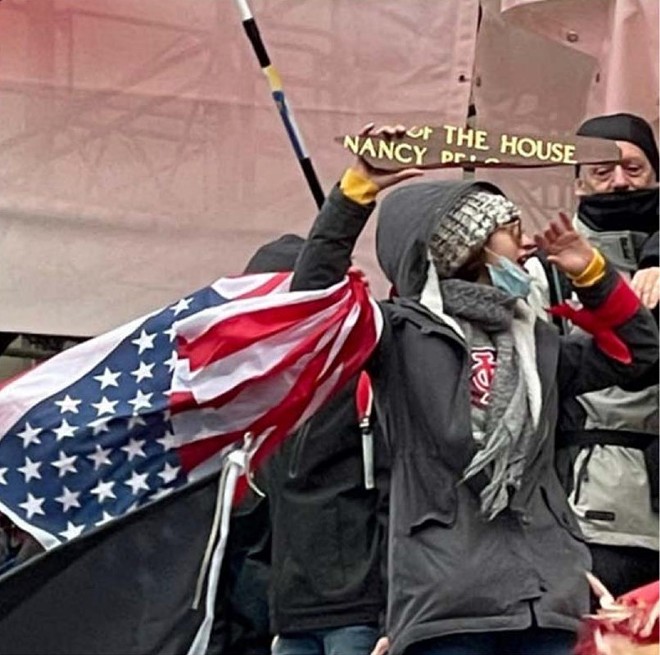 U.S. DEPARTMENT OF JUSTICE EXHIBIT
This is Emily Hernandez of Sullivan, according to the FBI.


Well, it was bound to happen: A Missourian has been charged in the U.S. Capitol riots.

Emily Hernandez of Sullivan in Franklin County made a memorable cameo in January 6 footage of the extremists, snagging Speaker of the House Nancy Pelosi's broken nameplate and parading it around the Capitol like a trophy, according to the FBI's account of her alleged actions, filed today in federal court.

Images submitted by tipsters show a woman identified as Hernandez wearing a St. Louis Cardinals' T-shirt and holding the splintered wooden sign above her head. She is in the thick of the extremist mob. Over her right shoulder in the Capitol is a Virginia man wearing a "Camp Auschwitz" sweatshirt. 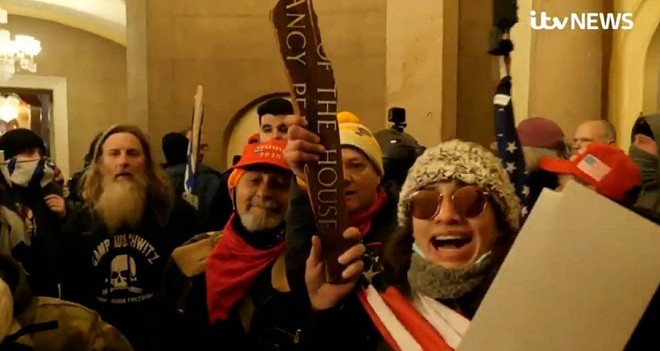 U.S. DEPARTMENT OF JUSTICE EXHIBIT
In the ITV footage, the woman identified by the FBI as Emily Hernandez holds the broken sign from Speaker of the House Nancy Pelosi's office.

If Hernandez was a popular figure among the insurrectionists, she apparently has a number of enemies. Acquaintances in real life and online were quick to give her up to the FBI. Three people contacted the feds, and "multiple anonymous tipsters" also provided info and images, according to court documents.

Investigators matched up British ITV's footage with Hernandez's own Snapchat video from the Capitol, the FBI says. A helpful frenemy also provided a photo of Hernandez wearing what appears to be the same distinctive winter hat in a Facebook pic.

An ex-high school classmate also identified Hernandez and told the FBI that she was from Sullivan. From there, an investigator matched photos of the woman in the Capitol with Hernandez's driver's license picture.

It did not appear from court records that she was in custody.