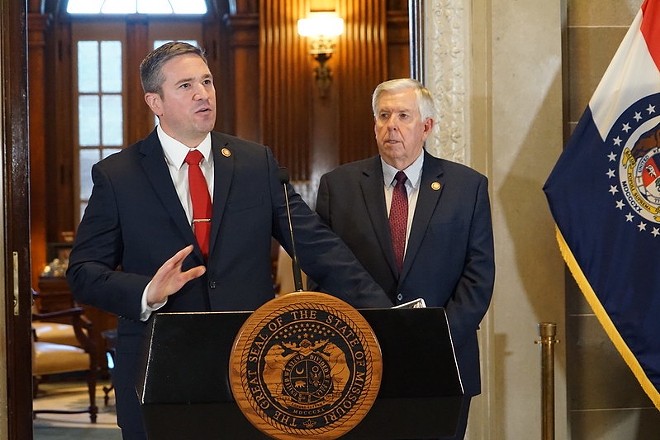 COURTESY MISSOURI GOVERNOR'S OFFICE
New Missouri Attorney General Andrew Bailey started his tenure by explaining some of the things he would not be doing.

On the door above the office of the Missouri attorney general is a plaque that reads as follows:

“I may be nothing special, but the last two guys were lying insurrectionists.”

OK, I made that up. But it would make a fine catchphrase for Attorney General Andrew Bailey, the latest lucky fellow to obtain higher office the old-fashioned way – by getting appointed by Governor Mike Parson.

Bailey has the benefit of following two of the easiest acts to follow since that time Kanye West and Marjorie Taylor Greene co-hosted Yom Kippur services. If Bailey doesn’t come to work for the next two years, they’ll list him on every “Political Rising Stars” list in America.

First came now-Senator Josh Hawley, tragically elected AG in 2016 by an unwitting electorate. Despite serving only 53 minutes, Hawley set the gold standard for shamelessness by actually — yes, not metaphorically — having his 2018 Senate campaign operation run his state office.

Hawley’s attempt to cover up emails between taxpayer-funded staff and political consultants resulted in a Sunshine Law violation. In something less than a profile in courage, Bailey told reporters last week, “I’m not going to second-guess how other offices have carried out their legal responsibilities under the transparency laws; I can only be responsible for how I’m going to do it.”

Parson replaced Hawley in 2019 with (yech) Senator Eric Schmitt (then state treasurer) after a search that certainly did not entail combing the state’s law libraries. Schmitt was different than Hawley. After two deceiving years of relative normalcy, Schmitt one-upped Hawley in the realm of political treachery.

Schmitt didn’t bother to bring campaign operatives into his state office. Instead, his Senate campaign acquired the office as a wholly owned subsidiary. The “no one does political amicus briefs like us” slogan on the official AG stationery should have been a dead giveaway.

The good news within the state is that Hawley and Schmitt are long gone on their respective missions to destroy American democracy. They’ll only be coming back to Missouri for fundraisers and the occasional that’s-me-wearing-overalls-on-a-tractor photo op.

Parson joked last week at Bailey’s swearing-in ceremony that his appointee had “sworn a blood oath” not to seek another office, as Hawley and Schmitt had done.

“I really want some stability in the attorney general’s office, and I think Andrew’s going to bring that,” Parson said. That’s a fine vote of confidence. And thanks, governor, for the tacit admission that Bailey’s predecessors were unstable. But they were at lot worse than that.

So, what can Missouri expect from Bailey? Which of Missouri’s most pressing criminal-justice concerns does Bailey have on his radar?

Well, funny thing there. The only headline item that came out of Bailey’s inaugural speech — and an ensuing press conference — was what he would not be doing as attorney general: enforcing the state’s law against illegal gambling. And no, that’s not a joke.

“Bailey told reporters that thousands of unregulated and untaxed slot machines are the responsibility of local jurisdictions,” the St. Louis Post-Dispatch reported. “That is an issue that’s up to local law enforcement investigators and local prosecutors.”

As the reporting went on to note, adroitly, “that posture is similar to one adopted by Schmitt, who could have issued an advisory opinion on the legality of the gambling devices as they began to flood gas stations, liquor stores and other establishments in recent years.”

Schmitt, of course, had no interest whatsoever in annoying the illegal-slot-machine industry. There was no MAGA connection and thus no electoral benefit to wasting time and scarce resources on a topic that didn’t target President Joe Biden.

And there was this: Former Republican state Representative Steve Tilley, now the most powerful lobbyist in Missouri, counts among his most prized clients the companies who operate the aforementioned gaming machines — which those companies insist are legal. Tilley has been a close ally of Parson, to put it mildly.

Far be it from me to judge whether these apparent slot machines violate Missouri’s apparent laws on the subject of apparent gambling. Let’s just say they’re controversial enough that in 2021 Schmitt felt compelled to return two $2,900 contributions from the owner (and his spouse) of Torch Electronics, based in Wildwood, which had been battling the state in court on the subject.

By amazing coincidence, Schmitt took this principled step immediately after the Post-Dispatch inquired about whether having accepted it might not constitute a conflict of interest. What a guy.

If you’re thinking Bailey plans to diverge from Schmitt, not so fast. It seems to have escaped statewide attention in the media, but this little tidbit from the Jefferson City News-Tribune provided insight into just how much Bailey might be full of Schmitt:

“‘We are absolutely going to look at every lawsuit,’ Bailey said. ‘I’m not here to start dismissing lawsuits. We’re going to continue to push back against President Biden’s illicit federal overreach, and we’re going to look for new opportunities to do that in the coming days.’”

Wonderful. Expect more Republican MAGA messaging at Missouri taxpayers’ expense any day now. And what should those taxpayers not expect? Pretty much anything else, it seems.

“Bailey declined to state priorities for his two years in office when his appointment was announced,” the News-Tribune reported. “He said Tuesday consumer protection and violent crime are among his top priorities.”

That’s great. But wait: “On the violent crime front, Bailey said local communities have ‘got to get it under control,’ adding the Attorney General’s Office stands ready to assist.”

If that doesn’t have the state’s criminal class shaking in its boots, what could? On the positive side, Bailey did not promise to continue Schmitt’s ongoing crackdown on St. Louis city officials for “holding office while Black.” But who knows?

Bailey might be just saying the things a Republican needs to say upon having the baton passed to him by a couple of nationally infamous scumbag traitors. There will be actions — or inactions — by the new attorney general upon which he should be judged.

Give the guy a chance. Maybe he’ll live up to the lofty principles he stated last week at his inauguration, as reported by the News-Tribune:

“The former Warren County prosecutor said the U.S. Constitution represents a national identity formed on the legal agreement that everyone is created equally and rights come from God. He said the legal system is designed to protect those rights, even when it’s inconvenient. The Missouri Constitution comes from the will of the people, and the government it creates is ‘instituted for the good of the people,’ Bailey said.”

I’m not sure what any of that has to do with, say, enforcing Missouri’s gambling laws. And neither, apparently, does Bailey.

But those words don’t match any description with which the likes of Hawley and Schmitt could ever be confused. And that’s perhaps a good thing.

After all, the only direction Andrew Bailey can go is up.