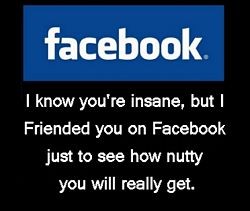 Admit it: You have some "friends" on Facebook who are, you're sure, raging narcissists or pathological liars and you'd definitely be able to diagnose them and suggest, in the most gentle and friendly manner, that they seek help, if only you had access to a copy of the DSM.

Well guess what? You're not alone. A group of psychologists at the University of Missouri had the exact same idea -- plus they're all fully equipped with copies of the DSM and access to thousands of undergrads enrolled in Psych 101 who will, for course credit, provide access to their Facebook accounts.

And what did they find? About what you might expect: Facebook postings (or lack thereof) can indeed indicate signs of, shall we say, psychological turmoil.

The study's lead researcher, Elizabeth Martin, a doctoral student, believes that it proves that Facebook can be a useful tool for therapists.

"The beauty of social media activity as a tool in psychological diagnosis is that it removes some of the problems associated with patients' self-reporting," she said in a statement. "For example, questionnaires often depend on a person's memory, which may or may not be accurate. By asking patients to share their Facebook activity, we were able to see how they expressed themselves naturally."

See? Facebook is capable of doing some good in the world!

For the study, Martin and her colleagues asked students to fill out a questionnaire that was meant to diagnose certain conditions, namely social anhedonia (being antisocial), perceptual aberrations (seeing things that aren't there) and magical ideation (the belief that two unrelated things are somehow connected in the grand scheme of things). Then they asked the same students to print out and hand in their Facebook profiles.

The researchers discovered that the students whose questionnaires indicated social anhedonia had fewer Facebook friends and posted photos and comments and "liked" things less frequently. They also discovered that the students who were less than forthcoming with their Facebook profiles -- that is, only handed in parts, not the entire thing -- tended to be the same who exhibited perceptual aberrations and magical ideation, not to mention a certain degree of paranoia.

The study was published in the December 30 issue of the journal Psychiatry Research under the title "Social Networking Profile Correlates to Schizotypy."

And it makes us wonder...if Martin and her team can get this much out of Facebook, could you imagine what they could do with Twitter?