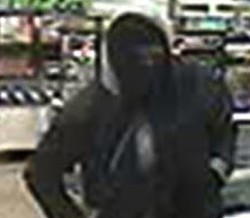 The St. Louis Metropolitan Police Department -- which has responded to two murders and seven other shootings in the last two days -- has released surveillance photos from the tragic 7-Eleven homicide that claimed the life of a clerk named Mon Rai. The 29-year-old Bhutanese refugee leaves behind a pregnant wife and an eight-year-old son.

The photo to the right is of the suspect, a male of an unknown race who appears to have a light complexion, police say. He is between 5' 6" and 5' 9" tall and has a "medium to stocky build," the department says.

More information and photos on the suspect below -- as well as images of a witness to the heinous crime.

Here are all photos police sent out this afternoon of the suspect:

Of the suspect police say:

[He is] a male of an unknown race but appears to have a light complexion. He is between 5' 6" and 5' 9" tall. He has a medium to stocky build. He is wearing a black jacket (with grey accents), black pants, black tennis shoes, black gloves and a black ski mask. He was armed with a silver, semi-automatic handgun. The details of the clothing are very important, as we believe the jacket is somewhat unique.

The witness, SLMPD says, is a black male with a medium brown complexion and is between 5' 9" and 5' 11" tall. He has a thin build and facial hair, especially on his chin. His hair is worn in a medium-length Afro on top with close cut sides.

Here are the witness photos, which are clearer:

Our previous coverage of the homicide: