You know, it's beginning to feel like pretty much an everyday occurrence, writing something about the current state of the Cardinals' bullpen. I suppose it's understandable, though; the relief situation for the Cards this year is rapidly becoming the single biggest defining characteristic of this team.
There was that first frustrating week when the pitching was brilliant but the team just wasn't hitting and none of us could quite figure out why. Those offensive struggles seem further and further away all the time now, going far and wee and looking like just-a-slump, the exception rather than the rule.
There's the absence of Adam Wainwright, too. Barely spoken of but still noticeable. There's a very tall hole with a very big curveball right in the middle of this team, and the lack aches just a bit. Still, the fact the rest of the rotation has come up so solid to this point has taken much of the sting from Waino's surgery.
No, more than anything else, the 2011 Cardinals are beginning to be defined day in and day out by their bullpen. Good days by the relievers mean wins. Bad days mean losses and gnashing of teeth. So with that in mind, let's look at each of the relievers who threw last night and see just how they did. Working back from the end of the game, since that's the way you build a bullpen, you know.
Eduardo Sanchez --
click to enlarge 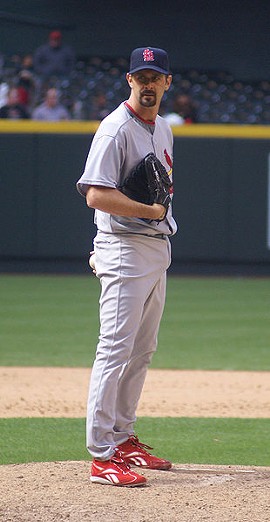 commons.wikimedia.org
Trever Miller has been a mainstay for the Cardinals in recent years, but his 2011 performance is not encouraging.
​Trever Miller -- Okay, I'll admit it: I'm starting to worry about Trever Miller. After a brilliant 2009, he was still good in 2010, but not quite at the same level. So far this season, Miller seems to have lost a big chunk of his arsenal, and it has to be a concern.
Watching Miller in 2011, I've found myself thinking of the way Dennys Reyes looked much of the time last year. Reyes would come in to face a lefty, get a strike or two on him, and then proceed to throw three straight breaking balls out of the zone, usually bouncing two of the three. Then, having worked himself into a full count corner, Reyes would be forced to come over the plate with something predictable, and he would get smoked.
Trever looks a little like that this year, in that he'll throw a couple good pitches early in the count, get ahead of a hitter, and then seem to be at a complete loss how to put the guy away. He can't seem to get that really good breaking ball in the zone, instead trying to get hitters to chase pitches well out of the zone. If a batter just waits him out, Miller eventually either has to come over the plate with something fat or -- more often -- give the hitter the free pass.
It's obviously a ridiculously tiny sample size, but Miller has now failed to record a single out in his last four outings, and has allowed at least one baserunner in his last six. His last unblemished appearance came against Arizona on the 11th of April. Hopefully this is just a bump in the road, but I would be lying if I said I'm not worried about Miller going forward.
Ryan Franklin -- And so we come to the very first reliever used, the pitcher who really got the ball rolling. For the Astros, that is. He gave up two more hits, both of which eventually came around to score, without retiring a single hitter.
I'm actually going to give Franklin a bit of the benefit of the doubt here. The double he allowed wasn't exactly a weak fly, but in another stadium with a more normal left field Matt Holliday might have made the catch. Then again, maybe not. Franklin still gave up hard contact to both hitters he faced, and didn't fool either of them with anything he tried.
I honestly wonder if, by this point, it hasn't turned into a real mental issue for Franklin. There's a definite physical component to his struggles, I think, as his stuff just doesn't look good to me at all, but I'm much more worried about his mental state right now. As someone who suffers from writer's block fairly often I can certainly sypathize; many is the day I sit down to the computer and just can't, for the life of me, come up with a single thing to write. It isn't just a lack of an idea; that's easy enough to deal with. It's a complete inability to do anything about that big white blank demanding to be filled. Sometimes I manage to fight through, sometimes I don't. (And I'm sure plenty of readers would argue I do my best work on days I can't write anything at all.) I would imagine throwing a pitch when your confidence is shot is probably a little like sitting down at the computer on one of those days when the words just won't come. It's worse than just frustrating. It's a helpless, impotent feeling when you know you have the ability to do what you want but something just keeps fighting you.
The more I see Franklin pitch, the more I worry about his head. When he lashed out at the fans for booing him, I immediately thought he was in serious trouble. Blaming external factors for your own poor performance is never a good idea, and says far more about the one casting the blame. I think Ryan Franklin needs a mental health break in the worst way.
It may not have been pretty, but the Cards managed to pull out a victory that could just as easily have slipped away. No matter how you look at it, the game last night was a success. Still, I could really go for a pretty, stressless blowout, and soon.