Tilley: When this guy is the Tea Party's public enemy No. 1, the whole world has gone insane.
A comment the Missouri House Speaker made this week regarding the fight over local control of the St. Louis police department has infuriated right-wing media -- and oddly -- placed free-market guru Rex Sinquefield in the cross-hairs of the Tea Party.

Speaking on the floor of the House this week, Steven Tilley (R - Perryville) was seemingly referring to a video posted on a local Tea Party website when he said that the debate over local control of the police force had led to "race-baiting at a level that I haven't seen since I've been here." (The video suggests black radicals would take over the St. Louis police department if the city is granted control of the agency.)

As Fired Up Missouri documents today, the editor of Big Government, Mike Flynn, has launched a Twitter attack on Tilley, a politician who has received unprecedented financial support from Sinquefield. This week one of Sinquefield's lobbyists, Carl Bearden, called the St. Louis Tea Party out in a tweet saying that the group needed to "distance itself from questionable material such as the videos that raises some real questions."

In response, Flynn has now promised that the Tea Party will "go nuclear" if Tilley doesn't "walk back" Bearden's "smear" against the party. Tilley, according to Flynn, is scheduled to appear this afternoon on Dana Loesch's radio show (2-4 p.m.) to defend himself. Loesch, btw, is editor of another of Breitbart's right-wing blogs, Big Journalism.

While it remains to be seen how Tilley will respond, Bearden isn't backing down. Here's a brief exchange he had with Flynn yesterday: 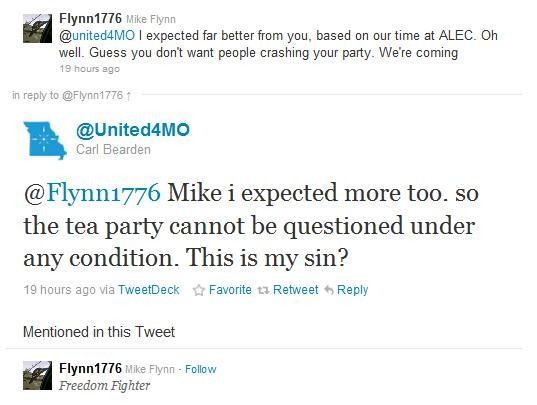