More on Those Collections Letters for Red-Light Camera Tickets 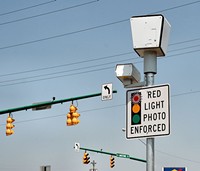 A blog item I posted earlier this month on St. Louis City using a Texas law firm to collect on unpaid red-light camera tickets continues to generate chatter on the Internets. And now, unfortunately, I'm part of the story.

A week ago I received my own collections letter from the San Antonio law firm of Linebarger Goggan Blair & Sampson for a ticket I received back in December 2007. That citation prompted me to investigate the city's red-light ticket racket program. The story that subsequently followed exposed how the city was legally powerless to collect the $100 fine for the tickets.

Part of my research for the article had me going to court to argue my own ticket before the judge. I won, with Judge Margaret Welsh agreeing that I came to a complete stop prior to turning right on red. Apparently, though, the court didn't pass along the paper work to camera vendor American Traffic Solutions -- and a year later I'm still on the hook for $100.

Last week I called the number on my collections letter. Here's what I discovered when I finally got in touch with a human being.

Contrary to what I reported earlier (when I could not get in touch with anyone with Linebarger Goggan et al.) the person I spoke to informed me that unpaid tickets won't affect your credit rating if you choose not to pay them. Instead, the Linebarger law firm will send your name back to the city where the police could issue a warrant for your arrest.

Right now, though, the city is not using that tactic, according to Mayor Francis Slay spokesman Ed Rhode, who told me earlier this month that the city has "elected not to go heavy-handed as our focus is on safety and changing behavior."

The person I spoke to at Linebarger also had little sympathy for my argument that a judge tossed out my ticket a year ago. "That's something you'd need to clear up with the court," he told me.

So, what am I going to do? Nothing. I'm going to wait and see what happens.

P.S. I've heard second-hand complaints from other people who say they either paid the $100 red-light fine or had their case thrown out by the court, yet they still received a collections letter from the Linebarger law firm. If you fall into that category, I'd love to hear about it for a possible follow-up story. Please leave your story in the comment box below.